<![CDATA[ <p style="text-align: justify;">Not even one – because just one drink can kill, is the key message from police as this year’s winter drink drive operation gets underway.

Head of PSNI Operational Support Department, Superintendent David Moore said: “During the winter drink drive operation last year, we detected 273 people who took the risk of killing or injuring themselves, their family, friends and other innocent road users by deciding to drive after drinking.

“This figure was particularly disappointing, but considering that some of these people were so drunk, they could barely stand up, it just beggars belief that some people still insist on attempting to drive after drinking,” he said. 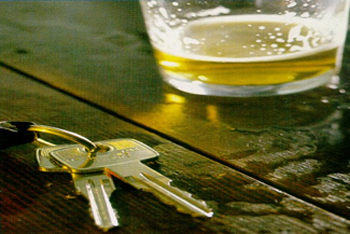 Never drink and drive. The current police campaign is pressing for zero alcohol consumption if drinking.[/caption]

In addition to running targeted operations to catch drink drivers throughout the day and night, in the weeks leading up to Christmas and into the New Year, police will again coordinate road safety operations across the border counties with colleagues from An Garda Síochána Traffic Corp.

Superintendent Moore added: “If you find yourself asking the question, I wonder if I’m ok to drive? Or if you find yourself trying to calculate if you are under the drink drive limit, whether that’s after one drink, or the morning after a night out, just don’t take the risk. The consequences could be catastrophic.

“People don’t accidentally have a beer or glass of wine, they make a conscious decision. It only takes one drink to impair your decision making ability. The only right decision is to leave the car or motorbike at home if you’re drinking.

Chief Superintendent Nigel Grimshaw also commented: “Last year forty three people were detected driving under the influence across C District between 25 November and 3 January. That is far, far too many.

“Most right thinking people know that drink driving is shameful and unacceptable. However, clearly there is still an irresponsible minority who ignore all the advice and warnings and put themselves and other road users at incredible risk.

“None of us want to see local police officers knocking on doors to tell families that a loved one has been killed or seriously injured in a collision at any time of the year, but especially over Christmas and the New Year.

“If everyone took responsibility for their actions on the road, did not drive after drinking or taking drugs, slowed down, wore a seatbelt and drove with greater care and attention then we could all look forward to a safe Christmas on our roads.”

Dale Ashford, Assistant Chief Fire Officer, Northern Ireland Fire & Rescue Service said: “Unfortunately firefighters, along with our colleagues in the Emergency Services, witness all too often the carnage on our roads and the lives completely destroyed caused by irresponsible driver behaviour such as drink driving.

“We want everyone to be safe when out and about on the roads this winter and for drivers to never get behind the wheel after taking a drink.  We fully support this campaign to reduce the pain, loss and suffering caused to individuals, families and communities caused by drink driving road traffic collisions.”