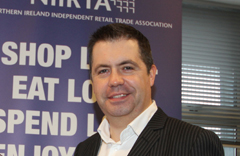 Glyn Roberts NIIRTA Chief Executive said: “NIIRTA strongly welcomes this new ‘Town Centre First’ approach for major retail applications in the new Single Planning Policy Statement. This is something we have been campaigning for, over a dozen years and is good news for local traders and town centres.

“Northern Ireland has not only the highest shop vacancy rate in the UK, but twice the UK national average. This is again supported by the GL Hearn research which was released today showing towns such as Ballymoney having a staggering 28% vacancy rate.

“This new policy should make it harder for developers to gain permission for large out of town retail applications.

“We are very clear. NIIRTA want to see major retailers locate their stores in town centres to enhance them, rather than unsustainable out of town locations which destroy jobs and local businesses.

“NIIRTA has always supported a planning system which can make timely and sustainable decisions which create real jobs.