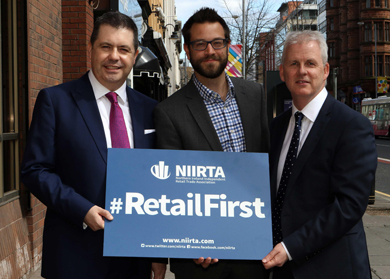 Retail First sets out wider policy priorities, which for the most part, are not devolved and fall within the current remit of Westminster, working in partnership with the NI Executive.

Speaking at the launch NIIRTA Chief Executive Glyn Roberts said: “As the largest industry in Northern Ireland, a growing, vibrant and entrepreneurial retail sector is essential for a sustainable economic recovery. Our members are community entrepreneurs – they connect people, business and investment, and they are the anchors in bringing in jobs to local people. We need to strengthen that connectedness and community spirit”

“Retail First is an ambitious plan which sets out, for the most part, non-devolved policy priorities which require a renewed partnership, not just between governments in Belfast and London, but across all of political parties and civic society”

“Given the real likelihood of a hung parliament, Northern Ireland’s MP’s could have a crucial role in shaping the policy agenda of the next UK Government. Retail First is our policy ‘shopping list’ to our local MP’s to advise them in any discussions with either the Labour or Conservative parties”

“We need the right incentives and the right environment for our businesses and enterprises to thrive locally, nationally and across the world. That means we need appropriately trained staff – a workforce that can adapt and develop to the changing needs of consumers and trade. We need the next generation of retail entrepreneurs to bring ideas to the table to keep us at the forefront of innovation”

“We don’t just need to talk about retail in Northern Ireland – we need to shout. We need to put retail first – no other place in line will do. And that is what we can do with this plan”

“Ahead of this election NIIRTA proposes we make our own pact, a growth pact between those of us here today – members of the retail sector – with all levels of government – 11 new councils, Stormont and Westminster – the growers of our economy”

Among the thirty points included in Retail First:

*  A NI International Infrastructure Conference to be held West of Bann, hosted by the Prime Minister, to identify potential funding streams and produce an agreed action plan to support our rural towns and villages

*  Date and a rate for Corporation Tax, to provide the step change our economy needs

*  The freeze on Fuel Duty to be extended across the lifetime of the new Parliament.

*  Support the establishment of a UK Small Business Administration on same lines as US version.