<![CDATA[ <p style="text-align: justify;">Chief Superintendent Peter Farrar has taken up the post of District Commander for C District this week.

He explained: “As District Commander, my main aim will be to continue the work of ensuring our communities are safe places for everyone, particularly those who are most vulnerable and repeat victims.

“I want to get back to basics and ensure everyone within this District is treated with respect and courtesy and that the officers serving these communities continue to do the best job they can for the residents, tackling the issues that matter most to them such as burglaries, anti-social behaviour and the scourge of drugs. 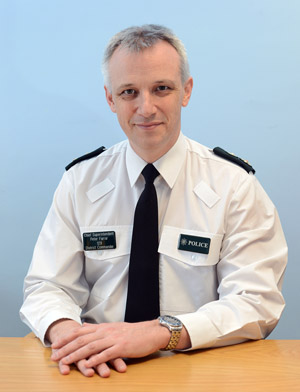 “I also believe that working together is the key to preventing and reducing much of the harm which affects our communities. There is an excellent foundation of partnership working in place across this District and I am looking forward to further building on this.”

On his first day in post, Chief Superintendent Farrar joined some of his Neighbourhood Policing Team officers out on the beat in the Kilcooley area of Bangor. He stopped in at North Down Alternatives to hear about their work within the local community.

He added: “Over the next few weeks, I will be spending a considerable amount of time out and about with my officers, seeing first hand the work they do. It will also be a great opportunity for me to meet with key partners and local residents to personally assure everyone of my own commitment to continuing the good work that already exists in this area.

“I am looking forward to working with my colleagues, partner agencies and the community to provide a personal, professional and protective policing service which is visible and responsive to the issues which are most important to local people across this District.”

Chief Superintendent Grimshaw has now taken up post as District Commander for A District which covers North and West Belfast.

Chief Superintendent Peter Farrar has 23 years policing experience across a range of districts and departments.

In 2002 he served as Area Commander in West Belfast leading sensitive negotiations around a range of parading issues. Throughout this time he also led the Auto Crime Team in delivering a substantial decrease in car crime in the area.

In 2006 he led a comprehensive review of PSNI Headquarters functions before taking up responsibility for investigations into Serious Crime in Urban Region in 2008.

In 2010, he became the Head of Justice Support Branch and in 2011 was promoted to Chief Superintendent, Deputy Head of Criminal Justice Department.

Most recently he held the post of Deputy Head of Operational Support Department with responsibility for Tactical Support Groups, Road Policing, Armed Response Units and Close Protection Units, and was closely involved in the strategic planning and delivery of the G8 Summit and the World Police and Fire Games in 2013.