<![CDATA[ <p style="text-align: justify;">Down Arts Centre has a busy weekend of fantastic events lined up, bringing familiar and new faces to the stage. 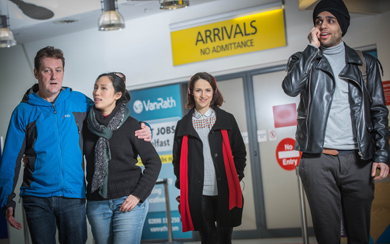 Arrivals will be showing at the Down Arts Centre[/caption]

On Friday 21 February at 8pm, c21 Theatre Company presents Stand Up Man starring Tim McGarry and Nick Hardin. On Saturday 22 February at 8pm, Terra Nova Productions presents stories about Northern Ireland’s newest residents in Arrivals, and on Sunday 23 February at 2.30pm, we round off the weekend’s events with the ever-popular Poems on a Sunday Afternoon.

Stand up Man, a play by Derek Murphy, starring Tim McGarry (BBC’s Blame Game and Give My Head Peace) and Nick Hardin (Philadelphia Here I Come and Lockout), follows its protagonist, Thaddeus McGuinn, over the period of one week as he journeys back and forth between his audience and his family.

People see stand-up comedian Thaddeus McGuin differently.  His son would like to see him gone, his wife would like to see him dead, and his audience would prefer not to see him at all. Disgraced ex-altar boy Thaddeus McGuinn is about to face his toughest audience ever, his own sins.  Thaddeus is one joke away from total mental destruction and one wife away from owning all the land he ever dreamed of, a burial plot.  Suitable for age 16+ (strong language throughout). 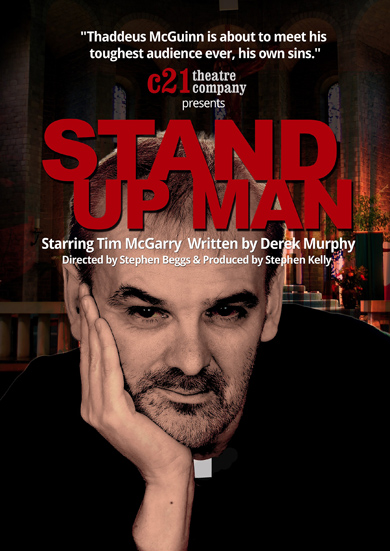 Tim McGarry in Stand Up Man.[/caption]

A cast of characters criss-cross the globe to land in Northern Ireland; searching for love, refuge, work, passion, friendship, for a new beginning.  Imagine Robert Altman’s film Shortcuts, mixed with a bit of Brief Encounter, a dash of Argo and a hint of Bollywood, and you might start to get a sense of the buffet of theatre on offer in Arrivals.

Artistic Director Andrea Montgomery said: “Arrivals was created to address the fact that although the 2011 census confirmed that 220,000 of our residents were born outside Northern Ireland, you seldom see their faces or hear their stories on the stages of Northern Ireland’s mainstream theatres.

Local professional actor James Doran, better known for his work with the Lyric and more recently on Game of Thrones, is joined by Michelle Yim from Hong Kong, Cristina Catalina from Romania, and Bristol-born British Asian actor Raj Bajaj.

DAC favourite, and well-respected singer-songwriter and composer Anthony Toner, worked closely with the writers and the multicultural team behind the show to create the score for the production.

Terra Nova Productions has plans for the future of multicultural theatre. The company will continue its work with partner organisations from across Northern Ireland’s diverse communities, and is aiming to get everyone involved.  Arrivals is suitable for age 14+.

On Sunday 23 February at 2.30pm we invite budding writers, readers and singers to join us for Poems on a Sunday Afternoon, where we celebrate the written word in all its forms.  Offering a friendly space to read, we hope that as before, those gathered will join in by sharing a piece of their own work, or perhaps a favourite poem.

We are delighted that Pauline Burgess will be joining us as our featured reader.  Pauline is a writer of children’s and adult fiction and has been honing her craft for nigh on twelve years now. Born and brought up in Rostrevor, County Down, Pauline was inspired by the beauty of the Mourne area and often finds it seeping into her writing. She also focuses a lot on the extraordinary lives of ordinary people in rural Northern Ireland; a recurring theme in much of her writing for adults.

As a teacher in nearby Castlewellan, Pauline fell in love with children’s fiction and began writing for a teenage audience some years ago. She has also been inspired to write for the younger market by her seven year-old daughter, Emma, who has loved books since she was a proverbial babe-in-arms. Emma’s riding experiences at Lessans’ Riding Stables, near Saintfield, prompted Pauline’s Pony Palace series, aimed at 5-8 year-olds, the first of which is due for release in May and a second in November – with hopefully more to follow. These books are to be published by Blackstaff Press, are written from the ponies’ point of view and have a distinctive Northern Irish feel to them.

As a recipient of the Individual Artist Award in 2012 and latterly the ACEs Award from the Arts Council NI in 2013, Pauline feels very privileged to be recognised as an emerging writer in Northern Ireland and is deeply grateful to all who have supported her on her writing journey.  She is looking forward to sharing her work with fellow readers and writers at Down Arts Centre on Sunday 23 February.