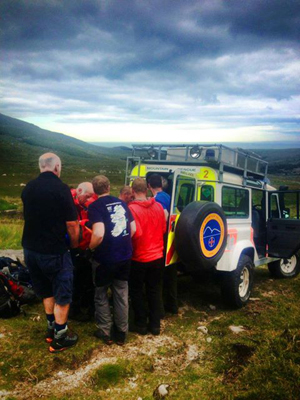 The MMRT quick on the scene to help an injured walker on Mount Binnian.[/caption]

The team received a call to attend to an injured walker. The man who had been descending Slieve Binnian sustained a serious leg injury.

The team responded, stabilising the injury before a stretcher evacuation into the Annalong Valley.

At first it was hoped that a helicopter airlift would be possible, but due to deteriorating weather Rescue 116 from Dublin had to leave the scene.

The casualty was then transferred to road by team vehicles for a handover to the Northern Ireland Ambulance Service.  A total of thirteen members responded and stood down at 10pm.

The MMRT extended their thanks to the NIAS, Belfast Coastguard, the South Down CG team and to Rescue 116 for all their assistance.