<![CDATA[ <p style="text-align: justify;">The campaign to save the sweeping beam at St John’s lighthouse came to a crunch last Saturday (14 March 2015) when protesters debated at a meeting in the old SPAR supermarket with the Commissioner of Irish Lights that the old lighting system must stay despite his recommendation it is to to removed primarily for health and cost efficiency reasons. 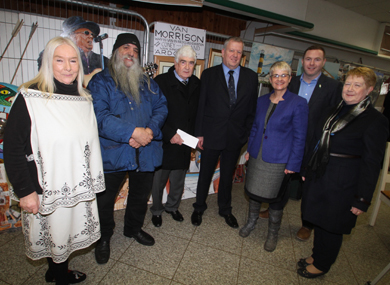 Campaigners Imelda Keeling and Willie Mulhall with Cllr Dermot Curran, Captain Robert McCabe of  CIL, South Down MP Margaret Ritchie, Chris Hazzard MLA, and Eileen Peters, campaigner at the meeting at Ardglass harbour to address issues regarding teh future of the lighting system at St John’s Lighthouse in Killough.[/caption]

St John’s lighthouse was built in 1844, and in 1909 the big lens was installed which threw a sweeping beam for 20 miles around the Irish Sea – and inland. In 1981, the lighthouse became more automated and the keepers were removed. An attendant then cared for the lighthouse.

The Commissioners of Irish Lights (CIL) are currently applying for listed building consent from the DOE to upgrade the Aids to Navigation systems at St. John’s Point Lighthouse, County Down. This work will argues CIL significantly contribute to the preservation and presentation of the heritage and history of St. John’s Point while also modernising and improving the Lighthouse Service. 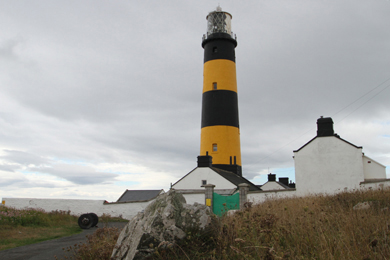 Addressing a Public Meeting organised by the Killough Community Association, Captain Robert Mc Cabe of CIL said: ” Firstly, I want to assure you that the service to the mariner will be improved by these works. St. John’s Point is an important Category 1 Aid to Navigation with a required availability of 99.8%. The replacement of obsolete 1kW filament lamps with an energy efficient LED light source will provide a more reliable and better quality light on both the main light and the sector light. Environmentally it is also a far superior solution allowing the removal of mercury and gas oil from the station.

“Mercury, being a hazardous and poisonous substance, is being removed for Health and Safety reasons. The changes will also reduce maintenance and running costs.

“Modern Automatic Identification Systems also provide improved services to the mariner including Synthetic and Virtual Aids to Navigation and real time wind and sea conditions. CIL are committed to providing a modern, effective aids to navigation service for all mariners. 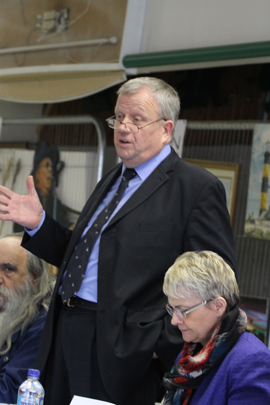 Captain Robert McCabe, Director of Operations and Navigation Services with the CIL.[/caption]

“There is also good news on the heritage front at St. John’s Point and other Irish Lights properties with major investment in five key coastal sites in Down, Antrim and Donegal to provide improved visitor and tourism facilities. From an Irish Lights perspective St. John’s Point is also one of our key properties for presenting the history and heritage of our organisation.

“Key to this vision is the extensive property itself, the history of the station and the Lecale coastline, the first order dioptric lens and the historic Ruston Fog Signal engines. The present Interreg project will see two former Lighthouse Keepers houses fully renovated to provide tourist/visitor accommodation. However, this should only be the start for St. John’s Point as there are significant opportunities for the development of first class a heritage/visitor centre which would open up the Lighthouse experience to a far wider audience. To provide this facility we need to resolve access issues and see the establishment of a local group to oversee the facility. Irish Lights are confident that such a facility will be delivered in the future.

“While our primary responsibility is to ensure that we provide the best possible service for the mariner we are also fully committed to maximising the potential of our heritage and history at St John’s Point and elsewhere.

“I would also add from the onset that Harry Henvey, the retired lighthouse attendant will be safe in his home and there is absolutely no question of him being moved out.”

Captain Mc Cabe committed to taking on board the views expressed at the meeting to the fullest extent possible and to working with the local community to further develop public access to St. John’s Point.

South Down MP Margaret Ritchie supported the protesters and said that following the public meeting with the Senior Director of the Commission of Irish Lights in Ardglass regarding St John’s Lighthouse at Killough, the beam must be retained and the fog horn reinstated, and both the British and Irish Governments must now intervene as the Commissioner of Irish Lights is accountable to them from a funding perspective, and has so far refused to listen to the views of local residents

Ms Ritchie said: “Following yesterday’s public meeting in Ardglass regarding the need to retain the sweeping beam at St John’s Lighthouse, the local population is resolute in their demand for the beam to be retained and for the foghorn which was removed some years ago to be reinstated.

“I support them in those simple demands. Quite clearly, the Commissioners of Irish Lights do not seem to appreciate the views of local residents, and are not prepared at this moment to reverse their proposal. In any event, I would still ask them, in a spirit of compromise to listen to the views of the local residents who view this beam as part of the local maritime heritage at Killough, and also a means of providing an aid to navigation and as a means of safety to all mariners and fishermen.

“Both the British and Irish Governments must now intervene to retain the sweeping beam at St John’s Lighthouse at Killough which the Commission of Irish Lights propose to remove and replace with a LED light. After listening to the submission made by Captain Robert McCabe who is the Director of Operations and Navigation at the Commissioners of Irish Lights who insisted on asserting that the existing light or beam was being removed for health and safety reasons, there is a clear inconsistency in how they deal with their engineering projects.

“Local residents are not opposed to the renovation of the former Lighthouse Keeper Accommodation for overnight visitor use, because they clearly value the tourism benefits that could flow from such infrastructure. However, they feel that the engineering solution involving the removal of the beam is not required. In fact, no real cogent reason was submitted for it’s removal. Why remove a beam that does not need to be removed?

“Whilst the Commissioners for Irish Lights are keen to assert that it is being removed for health and safety reasons, there is evidence that such lights have not been removed from lighthouses in the South East of England, and there is at least one Lighthouse in the South of Ireland where it is being retained.

“Commissioners of Irish Lights must ensure that meaningful consultation is undertaken with local residents in Killough; that they reflect on the views submitted to them yesterday; that this beam is retained; and that the foghorn is reinstated.

“I will now be raising these issues directly with the Ministers in the Department of Transport in London and Dublin and also with the British/Irish Council to ensure that they intercede with the Commissioners of Irish Lights to ensure that the sweeping beam is retained at the iconic St John’s Lighthouse at Killough” added Ms Ritchie.

Campaigner Eileen Peters pleaded: “If only one or two of these mercury-based lights are allowed to survive, then let one be St John’s Point.”

He said during a keynote address to the meeting that plans to remove the historic beam was “both obnoxious and at odds with local consent.”

Mr Hazzard said: “To date the Commissioners have failed to consult with the local Lecale community. as was the case with the removal of the Fog Horn a number of years ago… the views of local residents have been wilfully ignored.

“Today was an opportunity to express our deep frustration and anger at recently leaked plans to remove the sweeping beam from St John’s Point and replace it with a static LED light.

“As expressed quite elegantly by residents here today, this would be a severe retrograde step for one of Ireland’s most historic attractions.

Mr Hazzard added: “If the Commissioners are genuine about taking on board local concerns then they will explore any and all engineering solutions to this situation – it is vital that the historic sweeping beam remains at St John’s Point for generations to come.

“To ensure that as much pressure is brought to bear as possible on the decision makers, I have also now requested a meeting with the Minister for Transport, Tourism & Sport in Dublin, Pascal O Donohue TD, as he has official oversight of the Commissioners of Irish Lights.”

Speaking after the meeting, Cllr Dermot Curran said: “St John’s Lighthouse is the tallest one in Ireland. It is well known across Europe. It has made a major contribution to navigation and safety at sea over decades.

“It was good to see the local people of Killough and beyond come out in support of the lighthouse and the magnificent heritage associated with it. We must preserve this at all costs.

“There may be an issue with safety regarding the mercury bath the light rests in, but I think an engineering solution can be found. What needs to be done now is for all the bodies to sit down and talk to each other and find a path forward. A solution must and will be found.”

There was much discussion and the general feeling on the floor was that the rotating beam should stay and the foghorn should be re-instated.

Chris Murphy, Killough resident, said: “This move could in fact damage our tourism product. When you think of the fantastic history on this coast… Titanic passing on her past voyage, the grounding of SS Great Britain in Dundrum Bay, you have to look at all of this. It is akin to taking the heart and soul out of Killough. The lighthouse is quite safe, it is working and we should just let it continue. We should just let leave it alone.”

Jeremy Bryce, qualified naval architect, said: “There should be an engineering solution to this problem to meet the evironmental and heritage aspirations and maritime safety.”

Francis Gallagher said: “This should be referred to the North South Council. It is an important issue.”

Caroline Nolan, manager of the Strangford Lough and Lecale Partnership, said “This is an important piece of industrial archaeology. If it was removed it could be housed locally and become a very interesting local feature.”