<![CDATA[ <p style="text-align: justify;">Alliance MLA Kieran McCarthy has secured an extension into the consultation on the future of a local ferry. 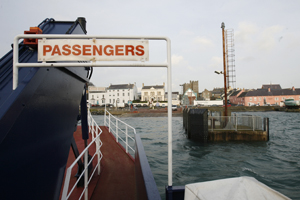 The Strangford Ferry consultation has been extended for another two weeks following a request by Alliance MLA Kieran McCarthy.[/caption]

The Strangford Lough Ferry service is currently taking place around proposals to make a recently introduced early morning sailing permanent. However, it would also see the final sailing of the day dropped.

The Strangford constituency MLA asked Regional Development Minister Michelle McIlveen to consider offering an extension to the consultation period, a request she has now granted, adding two weeks onto the timeframe.

“I made the request after the public outcry around the potential removal of the last sailing,” said Mr McCarthy.

“Portaferry has already received a number of blows lately, with the closure of the local hotel among them. To remove a sailing of the ferry would add to that, when instead we need to be telling people the area is open for business and tourism.

“Now we have this consultation open until December 11, so I would encourage everyone to participate in it by letting the Department of Regional Development know their feelings – the people of Strangford can inform the Department we want the ferry to keep its last sailing.”