<![CDATA[CAN NI21 make a difference to what many would describe as the broken politics of Northern Ireland? Can NI21 fix it? Are the party's doctrines, ideas, and policies shaping up enough in the short time of its existence before the coming round of Council, Assembly, European and Westminter elections to impact on the politcal process? These are questions that are basically probably too premature to answer, but what is currently politically significant is the early signals being sent out by NI21, a new dynamic and progressive party, that change is not just desired but preferrable for the many voters across Northern Ireland  - what John McCallister may describe as the disaffected. A core feature of NI21's rationale is that there is a majority of voters,  and even those who have not voted or will soon vote, who are potentially capable of changing the political system from what NI21 maintains is rigidly tribal. [caption id="attachment_44682" align="alignleft" width="390"]<a href="http://www.downnews.co.uk/wp-content/uploads/2013/11/john-mccallister-N21.jpg"> 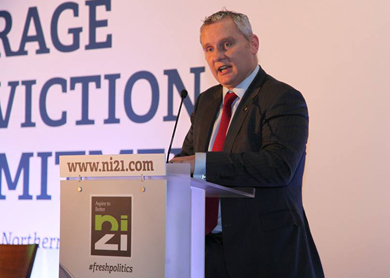 Bullet points made at the summary of John McCallister’s speech