Miss Bailie who is contesting a seat on Down District Council in this year’s local government election was accompanied by the party’s European candidate on a visit on local community groups and businesses across the town. 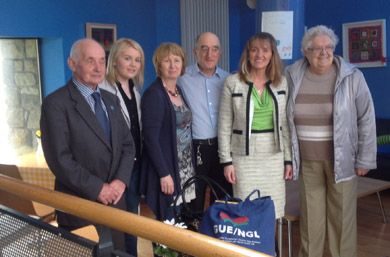 She said: “Martina’s visit here today to Downpatrick is her ninth visit to Down District in the last number of months. That shows her commitment and our party’s commitment to ensuring that the people of this district have accessible and strong leadership, locally and in Europe. Martina is a first class MEP and her delivery on issues in the Assembly and now in Brussels are a representation of her endeavours to deliver on equality and growth for this part of Ireland.

“I was delighted that Martina was able to meet with representatives of the Down Health Committee who briefed her on the on-going issues at the Downe Hospital. Martina reiterated her support for the campaign to restore the A&E service at the Downe Hospital and will write to the Minister and the Trust in coming days to raise a number of outstanding issues.

Ms Bailie went on to say: “Martina also held an important meeting with a number of local farmers on how she can deliver for them in Europe before meeting a few local business owners and traders.

“Sinn Féin consistently deliver and I would call on the people of Down to ensure your vote is a Sinn Féin one on 22 May to afford the people of this district a fighting chance to build a better Down and better Ireland.”