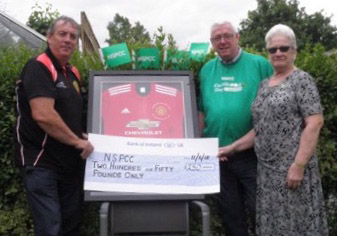 David Keating, Treasurer of Downpatrick Manchester United Social Club and Sam York, also from the club, present Vikki Methven of NSPCC’s Newcastle Committee with a donation to the charity.

This money was raised from a recent Night at the Races event. Sam has recently been honoured with  British Empire Medal ( BEM) in the Queen’s Birthday Honours List, for his service to the NSPCC’s Young Witness Service so it was a double celebration!

The service, which is unique to Northern Ireland, uses trained volunteers who support children and their families throughout the court process from start to finish, helping them through the often traumatic experience of having to give evidence.

Last year alone volunteers supported 549 children across Northern Ireland and have worked with almost 2,000 children and young people in the last three years, running across all Crown, Magistrate and Youth courts.