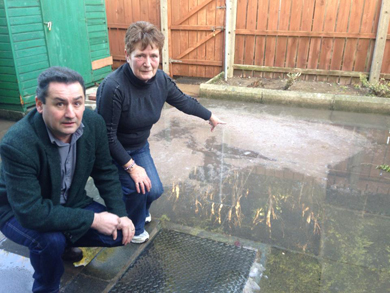 Councillor Willie Clarke with Newcastle resident Donna Feenan who experiences flooding problems in her back yard.[/caption]

Newcastle area Councillor Willie Clarke speaking following visits to homes in the area on Sunday morning said: “I find it disgraceful that residents have to endure this flooding… their garages and yards are being contaminated with sewage and every time it rains it creates sheer panic amongst residents. I find this current situation to be totally unacceptable.

“While the Mourne View estate and neighbouring Burrendale estate are still being flooded on a continual basis, one has to question how effective the pumping station is. The capacity has to be increased or an alternative solution designed because current measures are not bringing a resolution to the problem of flooding in the Mourne View road and Burrendale Park Road area.”

“Mourne View residents have faced years of flooding and they continually face the possibility that flooding may return, given the nature of the storm drainage system; the very least that can be expected is that a scheme is costed and designed to alleviate the problem.

“In the interim period homes must be protected from flooding and a short term measure should include the provision of flood guards to homes impacted by recurrent flooding situations. This protection system can be put in place in a matter of minutes and once the danger is passed, it can be disassembled just as easily and neatly stored away, this would reassure residents that their homes will not be destroyed.”

Sinn Féin South Down MLA Chris Hazzard, who was also in the areas affected on Sunday, said that he will be raising the issue with the Minister. He said: “There are a number of wider issues in the Newcastle area that need resolved once and for all to prevent this continual reoccurrence of flooding in certain areas. I will be bringing these issues to the relevant departments in the Assembly to ensure that there is a full investigation done into the issue in order to identify the problems and following that, all measures are taken to provide a long-term solution. Major infrastructure investment may be needed in order to put an end to this issue.” 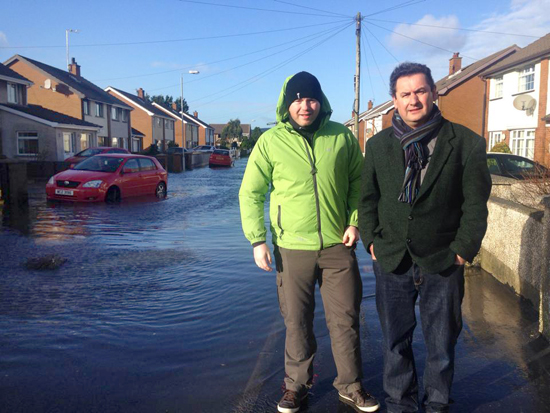 South Down MLA Chris Hazzard with Councillor Willie Clarke looking over the flooding problem in Newcastle on Sunday.[/caption]    ]]>