<![CDATA[ <p style="text-align: justify;">On Monday evening, members of the Lecale and Downe Historical Society gathered in the Down County Museum to attend the launch of the annual Lecale Review.

This year the journal of Down history, formally known as the Lecale Miscellany, has twenty excellent articles with photos and illustrations on a wide range of subjects. Maurice Hayes, Society guest speaker for the evening and a native of Downpatrick, wrote an interesting and poignant account of the death of Florrie Mearns in 1912 who had drowned in a pond falling through ice in the County town. Mr Hayes explained he had intended to build a house on the plot of ground at the time where the tragedy occured. 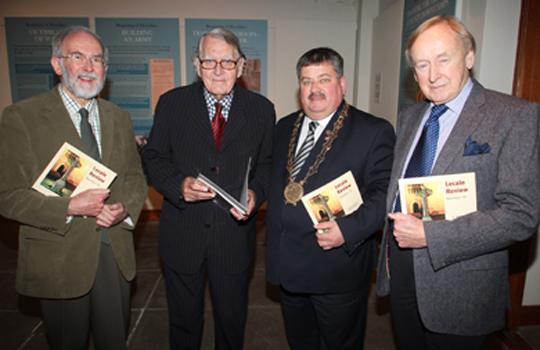 And Mike KIng, Curator of Down County Museum has written a lively account of “Moving the Downpatrick High Cross” addressing the battle to protect it from atmospheric corrosion.

William Stranney also made an excellent contribution with a study of John Boyd Dunlop who invented the pneumatic tyre. Dunlop who lived in Downpatrick for a number of years and a native of Scotland, had one of Ireland’s biggest veterinary practices located in Belfast and worked on a solution to making his son’s bicycle more comfortable. He sold his idea for £300.

There is an admirable collection of articles from Colm Rooney, Brian Walker, Brendan Mulhall and Pamela Cooper. Vivienne Pollock gave an excllent account of the life of a herring gutter girl. A shipwreck story from Eamonn McMullan and another of a cabinetmaker from Philip Blair and Walter Love, Society president, delved into the BBC archive.

Local Ardglass historian Michael Howland provided an solid account of the life of Lord Lecale (1756-1810) who lived in what is now Ardglass Golf Club. Frederick Pyne made an interesting contribution about an artist’s forgotten tribute to St Patrick followed by a review of the legends of the death of St Patrick by Duane Fitzsimons.

Thomas Hunter was revisited by Mary Farr. Hunter left Ardglass in the late 19th century to become one of America’s most prominent educationalists based in New York.

The  articles end with Colm Rooney writing a book review of recent publications and a review of the year by Wendy Osborne, Secretary.

Chairman Berkely Farr said: ‘It was an excellent evening with music from the Voices of Lecale Singers led by folk musician Laura Plummer. Members were delighted with the latest edition. We have been going now for 32 years and have covered a lot of ground since then. It has been a very pleasant and productive journey through our local history.

“Our editorial team did an excellent job in gathering and proofing all the material from the contributors and we must owe them our gratitude. There is an fantastic variety of material again this year.

“Our society has members as far away as England, Canada and America and Australia. It only costs £10 to join and that actually includes a copy of the Lecale Review. It is great value and would make an excellent Christmas present for those interested in our local history.”

Copies of the 96-page Lecale Review can be purchased at the Down County Musem at The Mall in Downpatrick.