<![CDATA[A Killyleagh teenager is now in training with his family to support a charity walk for "Walking for William." Scott Martin (18) suffers from a rare disability. He has Williams-Beuren  Syndrome (WBS), more commonly known as William's Syndrome, which is a genetic disorder which affects up to one in 20,000 of the population. It was first identified in 1961 and has a number of features one being a cardio-vascular defect. There is no known cure for WBS. [caption id="attachment_36523" align="alignleft" width="390"]<a href="http://www.downnews.co.uk/wp-content/uploads/2013/02/walkforwilliams-copy.jpg"> 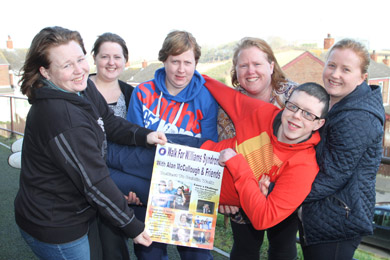 Gettting support! Cheryl Martin, Megan and Sabrina O’Hanlon, Marceila Martin, and Catherine O’Hanlon supporting Scott Martin on his leg of the William Syndrome charity walk from Belfast to Dublin in April.[/caption] There are thirty sufferers in Northern Ireland. Scott is a pupil at Knockevein Special School in Downpatrick, and will be leaving soon. On Wednesday 10 April to Saturday 13 April, supporters of the WBS Association of Northern Ireland are holding a fundraising and awareness walk from Belfast to Dublin. Scott and his family supporters will only be walking a small section of the route, but they are already in training for the big day. They will start off from the City Hall in Belfast and the walk will be in legs over four days ending up in Dublin in a grand finale for their charity appeal. Marceila Martin, Scott’s mother, said: “This is a disability that many people have not heard about and we are doing what we can to help raise the awareness of it. It is a very dibilitating problem for Scott and he requires care round the clock. Some nights he just does not settle down. He also suffers from bad asthma so he would be off school quite a bit. “We just have to keep an eye on him. He is in his twelfth year at Knockevin School and is used to the routine so the change will be difficult for him but we will manage this. He will be going on to SERC in Downpatrick  on an employability programme which will keep him busy on a pre-work programme for a couple of years. “He is very sociable and likes to chat to people. He is a member of the Down Special Olympics Club an loves to go to the Scout Hall in Downpatrick and join in the football when he can.” Scott said: “This is the first time I have taken part in anything like this. It’s very exciting. Five miles is a long way for me to walk but I’ll do it. I’m looking forward to meeting my friends on the WBS association in April when we do the walk. I’m just delighted that everyone is being so helpful. My aunts and cousin are taking part and they are walking around the roads just now getting into shape.” Cheryl Martin, Scott’s cousin, added: “We’re all looking forward to walking to help boost the finds for this charity. We do need to let people know what it is all about. The funds are to help fund a music camp at Lisnaskea Share Centre later in April for those who suffer from this problem. “So we are now in training and trying to walk a few miles a day – after this we all expect to be much fitter – and we may even lose a few pounds in the process! Altogether, Scott’s mother, three aunts and myself are walking. We will only be going on short legs of no more that ten miles each.” If you would like to donate to Scott Martin’s fundraising adventure, log on to : http://www.sponsor.ie/marceila-martin/walk-for-williams-syndrome/    ]]>