<![CDATA[Killyleagh sports enthusiast Kieren Laverty (21) is hoping to return to South Africa next January. <p style="text-align: justify;">He has fallen in love with what he describes as a ‘dream job’, teaching soccer to mainly deprived children in gang-ridden areas in and around Capetown. 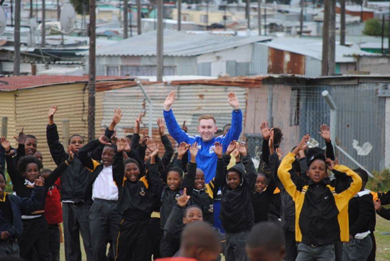 Kieren Laverty surrounded by his young soccer players in South Africa during his visit earlier in 2015 to coach in Capetown.[/caption]

Kieren, a former pupil of St Colmcille’s High School  and then St Coleman’s High School where he took his A-Levels, explained that he had studied for a BTEC Level III at SERC in Downpatrick, and added: “I played for Castleabbey and when I was a youngster, I was in the Killyleagh youth squad. I have developed a passion for sport and will be going hopefully on to Glasgow University and will complete a Sports Studies degree.

“It was earlier this year I travelled to Capetown to work in mostly depressed areas teaching soccer skills for two weeks. It was a fascinating experience and a real culture awakening. I contacted Matt Houghton of HQ Coaching who helped me on my way. He has also been involved with HUGS (Helping Ugandan Schools). He is the driving force in all of this and has been a great mentor.

“Soccer is a super way to get local children involved in team building – it is a way of reaching out to the adults and young people who are very much involved in a gang way of life. 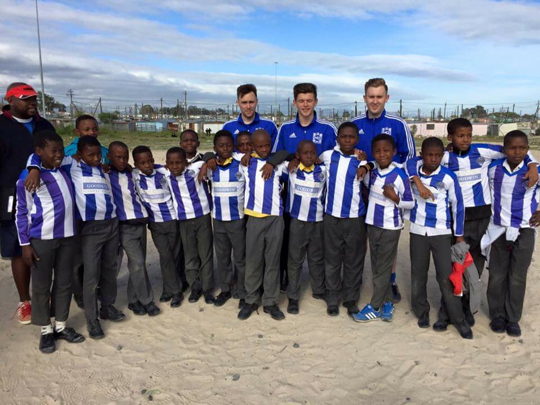 Kieren Laverty, back right, pictured with some of the young players from Capetown.[/caption]

“We found the people of South Africa very welcoming and friendly.

“Matt has about five or more trips a year to South Africa involved in this development work in soccer near Capetown. 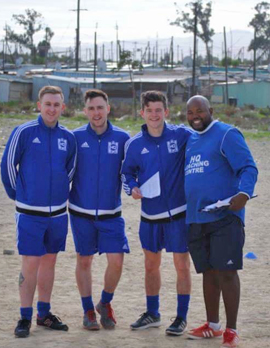 “We worked in areas that were quite troubled by inter-gang fighting but we were safe as we were outside this reality. Gang members have been killed. Basically the gangs just fight with each other. It is one of the worst areas in Capetown. But despite these huge difficulties we found that soccer brings people together.

“The place where we stayed was secure. It was a boarding school and at nights we took the Western Cape Sports School soccer youngsters  under the auspices of their top coach called Bradley Searle who is involved with Stefanians FC based in Cape Town. Bradley said in a farewell speach: ‘The fact that we have young people like you … that want to make a difference in this world, it gives us hope in humanity. Keep up the good work boys and continue to use your talents to uplift our youth. God bless‘.”

Kieran added: “We found that the children really want to get involved and their commitment is second to none. I have the opportunity now to step up and become an ‘ambassador’ in the organisation and it has just reinforced my desire to really get involved in international soccer development.

“I will be starting at the University of Glasgow late September and have to raise £1250 by January next year.   I’d certainly be grateful for any donations from the public who are willing to help. I will be running a few fundraisers in Killyleagh when I come home through the winter.”

If anyone wishes to get involved in coaching in South Africa, just email kierenlaverty@gmail.com to find out more or contact admin@thehqcoachingcentre.co.uk

If anyone wishes to donate to Kieren Laverty’s travel fund go to:

“I would really appreciate it if some local businesses got involved in Killyleagh, Crossgar, Downpatrick and Ballynahinch. This experience will certainly help my career, and will be of great benefit to the young people in South Africa,” added Kieren.