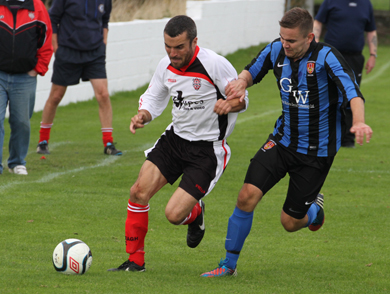 Hugh Ross in action for Killyleagh breaks dow the right wing.[/caption] Stephen Kennedy fired in a 71st minute winner to finally settle a hotly contested cup game at The Showgrounds on Saturday.
Stephen Johnston’s Killyleagh YC were pushed all the way by the students who showed why they are already in second place in Division 1A.
Johnston, seven matches into his reign at Killyleagh, has put his faith in the young ones, and they once again paid him back with a determined display.
If teenager Kennedy grabs the headlines with his goal, there was a Man of the Match performance from another teenager, Gary Murray, in the sweeper’s role, with two other young ones, Adam McDowell and Andy Carberry, also justifying the faith Johnston has shown in them.
The home side had the best of the chances in the opening half and it looked as if they had secured a lead when a surging run from the back from Murray created an opening for the impressive McDowell. He found himself in space but could not conjure up the finish. When it squirted free, Carberry was out of luck at the back post. [caption id="attachment_42512" align="alignright" width="390"] 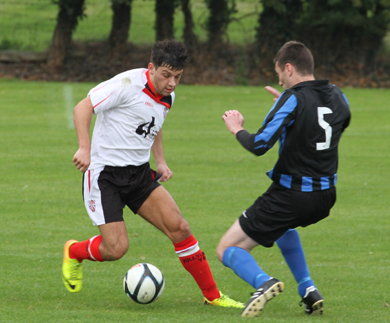 Adam Newell playing in the forward line for Killyleagh.[/caption]
The students enjoyed their best spell of the game after this as Killyleagh struggled to get any sort of a hold in the middle sector. Hugh Ross was introduced for the injured Niall Walsh but despite enjoying more possession. Alistair Coburn’s goal was not threatened.
The game erupted on the half-hour mark when YC skipper Hugh Dickson and a UUJ player were both shown a straight red card for an off the ball incident. Willie McIlroy was switched to become a makeshift centre half.
Killyleagh hit the post before the interval, with Kennedy’s free kick bouncing off the wordwork and some last ditch defending denying the lively Adam Neale.
After the break Darren McConnell went close from a free kick, and although the game was evenly balanced, Killyleagh posed the greater goal threat with the pace of Neale and neat wing play of Kennedy and Carberry causing all sorts of problems.
It was Carberry who played in Kennedy for what was to prove to be the decisive strike in the 71st minute. Kennedy took a touch and hit a beauty to the top of the net to send Killyleagh fans into Border Cup dreamland.
Killyleagh were content to close out play with McDowell getting through a lot of work in midfield and McIlroy and doing all that was asked of them at the back. McDowell was denied by a stunning save near the finish when his close range thunderbolt was punched clear. In the follow up the keeper recovered to deny the alert Neale who seemed poised to score with the head.
]]>