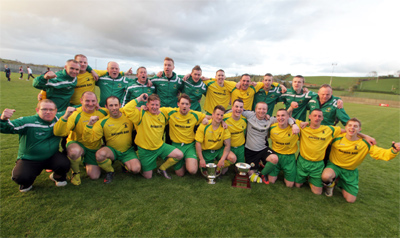 AS both teams strived from the whistle to make their mark in the Harry Clarke Cup, the first real opportunity came after three minutes when Killough midfielder Gerry McIlhone put an excellent a ball through to Matthew Sharvin but the shot was blocked by Castlewellan keeper Michael Watson.

As the match settled down it was Killough who were pressing more and looking for the opening goal. Another opportunity emerged when Jason Clarke took a free kick placing the ball to the head of Philip Gelston and the glancing effort just missed the under side of the top post. Gelston as always was prowling for goals.

By the fifteenth minute Castlewellan were pushing back into the game with some fine flowing atttacks one of which almost produced a goal from the head of left winger Stephen Trainor. There was no doubt  from the spectator perspective this was shaping up to be a classic conforontation between two proud former Harry Clarke Cup winners. 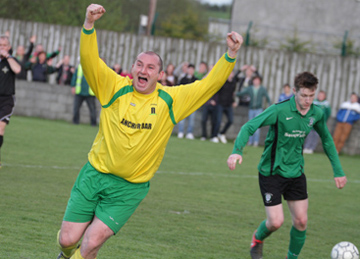 Both teams were launching viable attacks and it was the determination of both defences that kept the game goalless but in the twentieth minute, Killough struck with Freddie Connor beavering away at the Castlewellan defenders then crossing to Philip Gelston who found space in front of goal to left foot  the ball into the back of the net.

But Castlewellan came back quickly and strongly in an excellent team effort and Cheerers crossed to Patrick McKeown who almost headed the equaliser were it not for the sure hands of Killough keeper Chris Mallon.

Play then settled into a spell of both teams attacking at either end but it was always Killough who were harrying more for the ball and winning possession.

In the first half it was Castlewellan who were playing into the slight wind. Keown make an excellent low volley  that could have been the equaliser  but  keeper Mallon was on form and smothered the ball.

As the first half was almost finished,  it was Castlwellan’s forward Patrick Keown who took possession and rocketed the ball into the bottom left post giving Mallon no chance. Castlewellan had picked up momentum again and the whistle blew for the end of the first half. 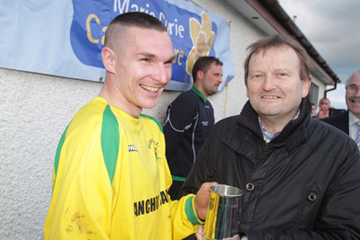 Killough’s Freddie O’Connor is Man of the Match and receives his trophy from David Martin, IFA Council member.[/caption]

The second period opened with Castlewellan making a couple of solid early attacks but Killough were fighting back and O’Connor crossed to Gelston who turned the ball beating the defender and shot at the Castlwellan goal from the centre of the box but keeper Watson again managed to block his effort. Freddie O’Connor was continuing his good form into the second half with a high work rate and contributing to many Killough attacks and feeding Gelston with good passes.

Inevitably the contest grew more physical as both teams tried to break the deadlock. Castlewellan’s Dean Anderson was booked for felling Fredie O’Connor.  At this stage it was Castlewellan under pressure from Killough.

Killough’s Matthew Sharvin took a corner and up went Matthew Burns connecting with the ball but it was too high sailing above the Killough woodwork.

It was Killough’s turn to receive a yellow card in the thirtieth minute as Freddie O’Connor energy spilled over. Both teams now were struggling for that elusive winning goal and Castlwellan had another good opportunity in the 33rd minute when Flanaghan half volleyed past the post. But Killough came back immediately with an effort from Gerry McIlhone heading just over the bar. It was to an expext a game of several near misses, any one potentially capable of turning the match.

Then it was O’Connor again who chipped to Gelston whose header was just out of target. In another quick attack following this Gerry McIlhone crossed to Gelston lurking at the back of the Castlewellan box and he headed the ball in the last minute of the game into the left of the goal out-foxing keeper Chris Mallon to put Killough into the victory seat.

There were cries of protest from Castlwellan that the ball had not crossed the line but the referee’s decision was final.

Killough were the winners of the Harry Clarke Cup Final. Had the game gone into extra time there is no telling how it could have ended up.