<![CDATA[ <p style="text-align: justify;">THE Downpatrick racing fixture on Friday evening past (27 September) in aid of the Jonjo Bright Trust proved a major success story with an estimated total of in excess of £30,000 raised through the gate receipts plus the auction items, ballot and raffles staged during and after racing. 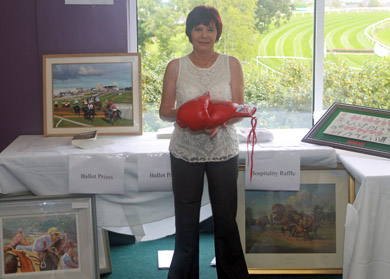 The Ulster-owned Bose Ikard came to the relief of favourite backers when landing the long distance hurdle in good style for Navan trainer, Noel Meade and jockey, Davy Condon. The winner is owned in partnership by Robert Watson from Dungannon whose Fisher Bridge won the Ulster Cesarewitch at the last Maze meeting and Edward Conroy.

Sizing Solution and Claragh Native appeared the principals as they battled out the finish of the beginners chase but the Eoin Doyle-trained Black Cache finished with a late flourish to land the prize under the determined drive of Davy Condon, supplying the jockey with a double as he replaced Mickey Butler  who was injured while schooling earlier in the day on the winner.

Doyle said: “He struggled over hurdles but he is better over fences. I told Davy to leave it late but not that late! He wants further, he was flat out and they came back to him. Not many would have won on him.”

Punters had an immediate setback in the opener when the Ken Condon-trained Roja Dove with Eddie O’Connell aboard was the surprise 20/1 of the first race and relegating favourite Sizing India into second place.  The winner readily led after the second last flight and sprinted clear of rivals and the winning jockey said: “She had a bit of form on the flat. She is a bit buzzy at home but she jumped well there.” 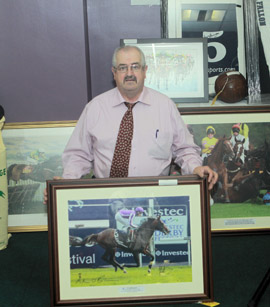 Downpatrick-based Turf Club official, Frankie Fitzsimmons pictured with some of auction items in aid of the Jonjo Bright Trust Fund and holding the picture of Camelot winning the Epsom Derby signed by Joseph and Aidan O’Brien.[/caption]

Imperial Joey partnered by Andrew Ring made all the running for another clear cut victory and claimed the handicap hurdle again denying the race favouriteCyras Love.  The winning rider  said: “On his hurdles form he was good enough to win today. He ran over two mile at Kilbeggan and they went a little quick for him and he didn’t get home. That’s my tenth winner and my third of the season.” And winning trainer Philip Rothwell quipped:  “I’m going to get Andrew a set of wing mirrors for Christmas!”

Rattan trained by Champion trainer Willie Mullins with Ruby Walsh aboard was a popular winning favourite. The winner made a mistake four from home but was given time to recover and lead at the final fence to prevail best in a three way fight to the finish.

Mullins who was at the local meeting advised: “He won on the flat in England before we got him and now he’s won a flat race, a bumper, a hurdle and a chase. He’ll mix it over hurdles and fences. It was a fine ride by Ruby. He did well to survive. I changed tactics and dropped him in. I said to Ruby to try and get him passing horses. He likes things his own way so we gave him an easy time and it worked out.”

The Charles Byrnes-trained Lash It On with claimer Robert Jones in the saddle proved the convincing winner of the handicap chase. Favourite Pat Garrett was again let down by his jumping in an incident-packed event and a mistake at the penultimate fence saw the Noel Meade runner only able to finish fourth at the finish. The winning County Limerick trainer said: “He’s bottom of the pile – rated 77 but  he is Solwit’s lead horse at home.”

The last of the day was landed in style by Maigh Dara partnered by Paul Power with trainer Kieran Purcell having also won the bumper at the previous meeting at the track. The County Kilkenny handler explained:  ” The track suited him and they have done a great job with the ground here. He’s a nice horse and I’ll look for a maiden hurdle next.”

The East Down Foxhounds parade at the Downpatrick races.[/caption]]]>