<![CDATA[ <p style="text-align: justify;">Strangford MP Jim Shannon has been selected to run again for Westminster in the upcoming May elections. 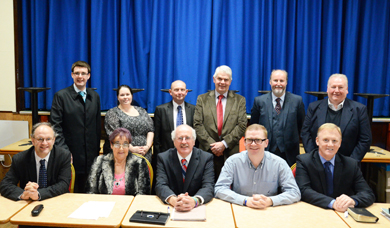 Jim Shannon, a former DUP MLA, explained he was delighted to once again have the opportunity to stand for election to serve the people in the Strangford constituency and said: “It has been an honour to serve in Westminster representing the people of Strangford.

“I have represented them at every level in areas such as health, fishing, agriculture and and I have striven to put Strangford on the map.

“I don’t think any other constituency has been mentioned as much as Strangford, I do my best to talk about it at every opportunity as well as Northern Ireland as a whole. I like to make sure that in this United Kingdom of Great Britain and Northern Ireland, we are not forgotten about.

“I have spoken on a number of wider issues such as the persecution of Christians throughout the world, our position in Europe and on big issues like securing the marriage tax allowance, fighting to have the military covenant implemented in Northern Ireland and in allowing us in Northern Ireland to make our own decisions on same sex marriage.”

Councillor Billy Walker, who is Down District Council Chairman, added: “I could not attend the convention as I was in Ennis attending a Cooperation North event. However, I welcome the decison to return Jim Shannon as the DUP candidate for the May 2015 Westminster election for Strangford. Jim is the hardest working MP the constituency has ever had. His work rate is second to none.

“No other MP in Northern Ireland has build up an advocacy service such as Jim Shannon. He has advice offices from Ballywalter to Ballynahinch staffed by trained staff, councillors and MLA’s. He covers a wide range of matters from housing, planning, welfare and disability rights and he also when possible will make home visits, something which very few other MP’s can do.

“Jim also has a great work record at Westminster. It seems a short four years since Jim’s opening speech which he delivered to the Commons in Ulster Scots and he hopes to have the opportunity to represent Strangford again in the May elections next year. Last year alone he attended 212 debates, was recorded in 63.36% of the voting in parliament, and he asked 560 written questions in parliament. He has a team of eight staff who  helped him deal with thousands of constituency queries from the Strangford area.

“So as a local district DUP councillor, I am looking forward to canvassing with him in the coming election in the Rowallene area.  Jim Shannon  will once again  show the commitment that his constituents expect of him and I know he is personally looking forward to another term as MP for the Strangford constituency.”