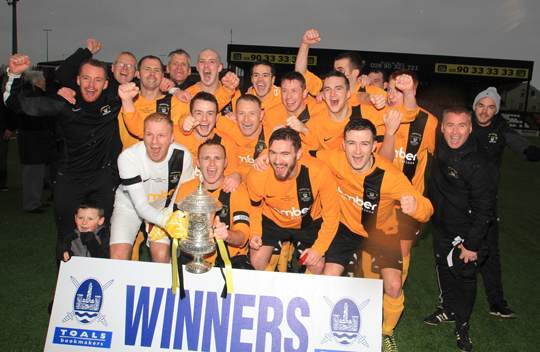 The H&W Welders celebrate after beating Albert Foundry in the Steel and Sons Cup at Seaview.[/caption]

It was cold and a heavy drizzle prevailed, but this local Belfast derby was sizzling by the end of the second half. Both teams had earned their right to be their with excellent wins over formidable opponents. 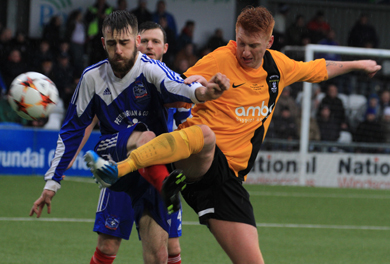 The H&W Welders beat Dundela 0-6, UUj by 1-7, and St Patrick YM, Ards and Crusaders reserves all by 1-2. Albert Foundry equally performed well with a crushing win of 9-0 over Ballymena Reserves, 3-2 over Glentoran II’s, 2-0 over Sirocco Works, and 1-3 over Larne FC. Both teams were capable of scoring well…  given a chance.

As the matched commenced, it was evident that both teams were fairly well matched and you could just about put the thickness of a matchcard between them, so close they were in the to and fro struggle. Initially the Welders were pressing forward. Josh Cahoon was making his presence felt on the pitch early on for the Welder’s with some positive attacking play.

The first real chance came at 10 minutes when Welder’s midfielder Scott Davidson crossed to Cahoon who made a flying header which just went over the bar. Paul Young, Jamie Mitchell and Ian West were connecting well together giving the Foundry defence something to think about. Cahoon had another volley at the Foundry goal testing keeper Stephen Cairduff, who was awarded Player of the Match. 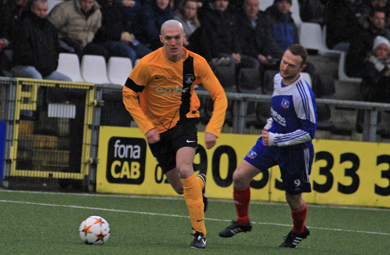 Dan McMurray defending for the Welders.[/caption]

Albert Foundry were a bit underpowered in the midfield and were seeing less quality balls going to their forwards than the Welders, but nevertheless were holding their own. Then Michael McLennan took a dipping volley at the Foundry goal…  it was on target but well held by Cairnduff.

By at the 22nd minute it was the Foundry who were applying the pressure with an excellent move from Darren McComb who put it through to Jamie Mitchell who struck it well but hot the top post. The game began to tighten up and Ian West was yellow carded fro a heavy tackle on Craig Harris as the Welders ploughed into the Foundry half.

The Foundry started to make inroads into the Welders territory and Darren McComb volleyed just over the Welder’s top post. They were looking more like scoring now and confidence had risen making the team gel and rise to the occasion. 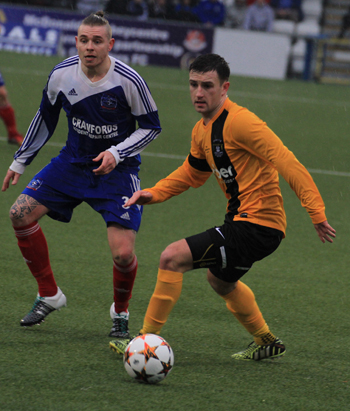 But in this see-saw first half Welder’s Paul Young  broke through to face Foundry keeper Cairnduff who made a tremendous reflex save as the first 30 minutes ticked by.

Then when the spectators were almost getting dizzy with the frenetic tennis syndrome of play, Michael McLennan broke through for the Welders and slotted the ball past Cairnduff to take first blood in the 34th minute.

Immediately Albert Foundry went on the offensive to try and pull back an equaliser before half-time. But this was no easy task given that Welder defenders Dan McMurray, Gary Spence and Paul Dickson were quite tall in comparison the the Foundry front line.

The second period started with the Welders pressing forward early and an excellent glancing header by David Rainey was saved well by the needle-sharp Cairnduff who clearly was on form.

As the half progressed, the Welder’s midfielders seemed to give them an edge, but Foundry could not be written off as sub Scott Davidson broke through to challenge Cairnduff. Then a good play by Welder’s McLennan and Rainey fed the ball to Cahoon  who blasted it at the Foundry goal but it was again held by Cairnduff  on the 18th minute. 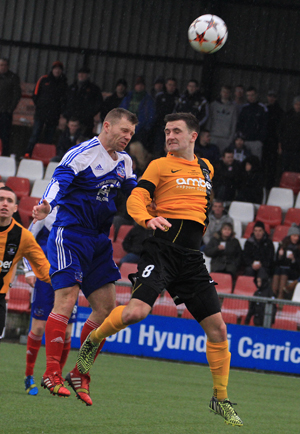 The Foundry had worked their way back into the match and the few good plays had restored their confidence. A one:two by West and McComb almost pulled off a goal. But in the 26th minute, McCord, Harris and West played the ball through to Darren McComb in the back of the box who chipped in to the back post for an equaliser goal. The match now came alive with both teams going up a gear.

Foundry’s Harris found himself inside the box and shot but Welder keeper Michael Dougherty smothered the ball. Foundry were certainly going for broke and could smell blood as the Welder’s looked momentarily frail. Sub Marcus Beattie took a volley at the Welder’s goal by keeper Dougherty had it under control. But the Welders could not be written off as an attack by sub Neil Dougan showed when he struck a low ball just millimetres wide of the post.

But the miss of the match before the teams went into extra time must go to Ian West of Albert Foundry who probably could not believe history was in the maing with one kick when Harris passed the ball from the right to him as he looked at an open goal just yards from the goal line – he struck it over the bar.

Then in a strange turn of events with extra time played Foundry had five consecutive corners to try and nail the Welders to the cross. But they failed to do this and referee Stephen Taylor blew for extra time (10 minutes each way.)

Both teams had opportunities in extra time but failed to capitalise and the match went to penalties.

The Welders strikers all scored with Chris Middleton scoring the winning goal after two Foundry players failing to net the ball.

It was game set and match for the H&W Welders in their second Steel and Sons Cup win. 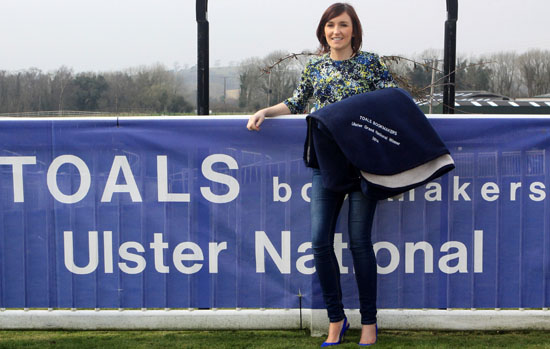