A new touring exhibition featuring watercolours of Irish town life in the 1820’s by the noted Irish painter of portrait miniatures, Sampson Towgood Roch, opened on 16 October at Down County Museum, Downpatrick. 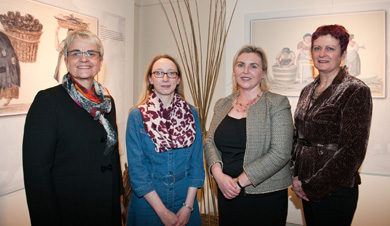 The exhibition, on loan from National Museums Northern Ireland, features the original sketch book in which Roch painted his watercolours. Dating from around 1824. The watercolours provide a fascinating insight into the life of ordinary people in an urban setting in pre-Famine Ireland.

Born in Youghal, County Cork, in 1757, Roch was deaf and appears to have had no formal training as an artist. Nevertheless, art became not only his livelihood but also his means of recording the world around him. The watercolours in the sketchbook on display at the museum are believed to have been painted by Roch from sketches made on location.

The watercolours in the sketchbook are complemented in the exhibition by artefacts from Down County Museum’s own collections including clay pipes, stave-built vessels and a model jaunting car.

Newry, Mourne and Down District Council Chairperson, Councillor Naomi Bailie, said: “This is a lovely exhibition of images of early nineteenth century life in Ireland and contains many colourful and detailed impressions of working life. I am delighted that our museum is displaying this work and would like to thank National Museums of Northern Ireland for lending us the material.”

MP for South Down Margaret Ritchie attended the launch of the Roch exhibition at Down County Museum and said:

“I was deeply impressed with this exhibition when I attended the launch on Thursday 15 October.

“As Member of Parliament for South Down, and as a strong advocate of the museum, I was delighted to attend the official opening.

“Roch’s watercolours provide a fascinating insight into the ordinary lives of people in pre-famine Ireland. Born deaf and mute, Roch expressed himself through his art, perfectly encapsulating the urban and country lifestyle of the 19th century.

“I was delighted to attend the launch of this exhibition which will attract many locals, tourists, art lovers and historians, through the doors of the Down Museum.”