44-year old Sean McLaughlin from Killough is now in the Ulster Hospital Coronary Care Unit waiting for a triple bypass. He gave her a hug and said: “I am glad you were there, otherwise I was a goner.” 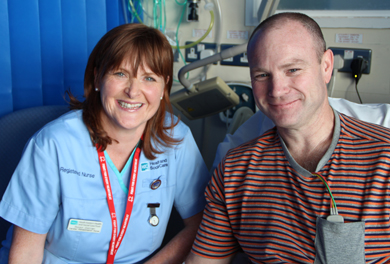 Cardiac nurse Roisin Dorrian with Sean Mclaughlin who had a heart attack on Saturday evening.[/caption]

Roisin said: “I just did what I am trained to do. It’s a great feeling that I was able to save Sean’s life”.

Sean McLaughlin had been taking part in a charity boxing match on Saturday evening for the Coney Island youth soccer team in Ardglass Community. He revealed today that he only got involved two weeks ago, after someone else pulled out. However, he had recently lost two stone and had been training regularly in the gym. “I was doing well in the gym and felt really fit and healthy”, he said.

At the end of his second round, he suddenly felt unwell and collapsed in the ring with a heart attack. Roisin had just arrived to help at the event, and saw the Order of Malta first aiders go to his side. She added: “Then I saw they were doing CPR, and I realised it was serious, she said. I just dived into the ring and shouted for a defibrillator, and fortunately the Order of Malta had one. He was unconscious at that stage. I did two lots of CPR and shocked him once, and by the time the ambulance came he was beginning to come round. I am very proud that I was able to help.”

Sean said: “That was the beginning and the end of my boxing career. I don’t think I will be doing it again. I can’t remember what happened on Saturday night, I can just remember seeing the ceiling. I owe my life to Roisin, and I can’t thank her enough.”

Sean and Roisin have never met before, despite living in the Ardglass area. But in an amazing coincidence, Sean will be discharged into Roisin’s care after his triple bypass operation. “He will be sick of the sight of me by then,” Roisin joked. He will see a lot of me.”

“On a serious note, this demonstrates the importance of every public building, or event. having a defibrillator to hand with people trained to use it.”