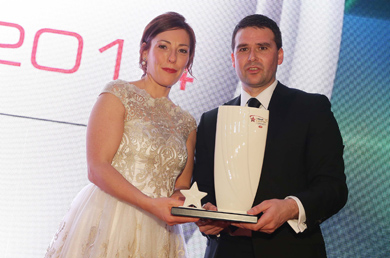 David Healy with his Hall of Fame Award presented by Joanne Hayden, Sales and Marketing Manager of Linwoods, sponsor of the Belfast Telegraph Sports Awards 2014.[/caption]

Killyleagh soccer star David Healy is one of Northern Ireland’s favourite sporting sons and over the past decade he has given the country some of its most magical moments ever!

That is why he is a worthy inductee into the Belfast Telegraph Hall of Fame, joining Northern Ireland’s sporting greats including iconic footballers such as George Best, Pat Jennings and Gerry Armstrong. At a time when the country didn’t have a lot to shout about in a sporting context, it was Healy who delivered time and time again against big teams and big players on the big nights. It is little wonder that he is now regarded as one of Northern Ireland’s sporting greats.]]>