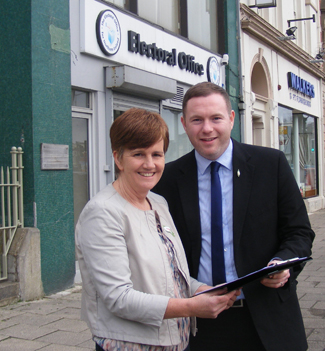 Chris Hazzard, Sinn Féin Westminster candidate for South Down, was officially registered at the Electoral Office in Banbridge last Friday.

He was in a confident mood outside the Electoral Office, pictured before submitting his nomination papers, accompanied by election agent, Caitríona Ruane.

He said: “As the largest political movement in Ireland, Sinn Féin is offering the people of South Down something that no other candidate is capable of doing.

“As MP I will work in the interests of everyone in South Down, drawing support from our members on the Executive, our other MP’s and twenty-nine MLA’s, our four MEP’s in Europe, three Senators and 14 TD’s in Dublin, along with 264 councillors, and a growing membership and support base.

“South Down badly needs to tap into this momentum. We need to set our economy and our community on a new direction. We need to build inclusive partnerships for change for the future,” added Mr Hazard.