Sinn Féin MLA Chris Hazzard has asked Road Service officials to urgently carry out a risk assessment on a bridge in Drumaness. 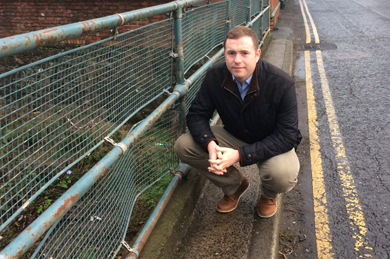 Double safety issues: Chris Hazzard has voiced his concerns about safety in Drumaness over a bridge and school pupils alighting on the main road.[/caption]

Speaking from the scene, the South Down MLA said it “should be a priority that this work is carried out as soon as possible.

“The existing safety barrier on the bridge needs upgraded as the wire panels have been damaged to such a degree that someone could place their foot in the gap and climb to the top.

“As can be imagined, this is an extremely worrying scenario for parents as one wrong footing would result in a harrowing fall into the river below.

“As worsening wintery conditions increase, the chances of a fall from the barrier if a young person was to climb up also increases. I would hope this situation could be addressed as soon as possible.”

Mr Hazzard added: “I understand the financial constraints within the Department but safety issues such as this must surely be given priority.”

Chris Hazzard MLA has written to the South Eastern Education and Library Board seeking an explanation as to why children’s lives may be at risk on the outskirts of Drumaness.

He said: “It has been brought to my attention that children returning from St Malachy’s High School are no longer permitted to disembark from the school bus at the top of the Drumsnade Road but are forced to continue on for a mile before they are allowed off the bus at what is locally known as McAllister’s Corner.

“Despite the fact that there is an official Translink bus-stop at the original Drumsnade junction, these children are being asked to cross the main Newcastle A24 on a blind corner, walk for a mile back up the hill to cross the road again on the brow of a hill to return to the spot where they have disembarked for years. It’s sheer madness.

“Children’s safety to and from school is paramount but unfortunately the SEELB have taken a retrograde step here. There is simply no logic to this decision and it must be reversed as soon as possible before we are dealing with the horrible consequences of an accident,”  added Mr Hazzard.