<![CDATA[ <p style="text-align: justify;">The Minister for Social Development, Mervyn Storey MLA, has called on local residents to have their say on the future development of Banbridge town centre.

Minister Storey was speaking during a visit to the Town Hall to view the Banbridge masterplan proposals which will remain on display for 12 weeks. 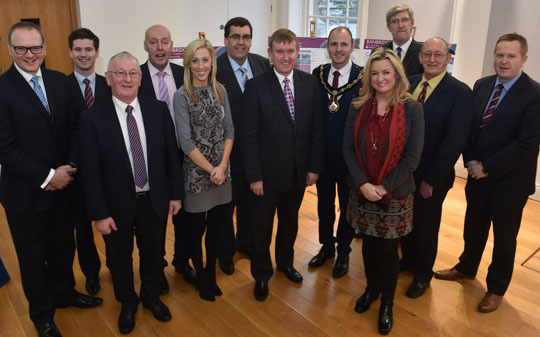 He said: “The Banbridge masterplan gives us a glimpse of what the future could hold for Banbridge. There is a real opportunity to capitalise on its distinctiveness, character and charm and the masterplan shows just how much potential the town has.

“The masterplan proposals are inspirational, distinctive but most importantly deliverable. However, to ensure that we have as robust a document as possible and fit for purpose for the people of Banbridge, I would encourage anyone with an interest in the town to take a look at the proposals and use this as an opportunity to help us shape the Banbridge for the future.”

The masterplan proposals will be on display at the following venues:

The plans are also available on both DSD and Armagh City, Banbridge and Craigavon Borough Council Internet Sites at:

Lord Mayor of Armagh City, Banbridge and Craigavon, Councillor Darryn Causby, said: “The Masterplan is an essential document for the future development of Banbridge. It will be used to steer regeneration initiatives in the town centre over the next 15 years ensuring that our town remains competitive and progressive as the role of town centres change and expand.

“There are a number of new and exciting proposals outlined in the Masterplan however the Council want to involve as many local people as possible with its development and are very keen to hear their opinions and ideas.

“I would encourage the wider community to get involved in this important process by providing feedback on the forms which will be available at each venue. The feedback we receive will then be included within the final Masterplan.”