Strangford DUP MLA Simon Hamilton has welcomed Environment Minister Alex Attwood MLA to Saintfield to discuss how the Department of the Environment might be able to assist the village improve its excellent built heritage.

Mr Hamilton and Minister Attwood were joined at the meeting and walkabout by members of the Saintfield Development Association and Saintfield Heritage Society along with Strangford MP Jim Shannon and Rowallane Councillors Billy Walker, William Dick and Terry Andrews. 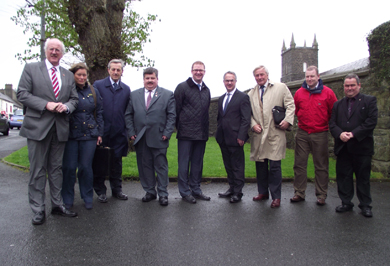 Commenting after the visit, Simon Hamilton said: “Saintfield is blessed with a brilliant built heritage.  Many of the buildings in the Conservation Area covering Saintfield’s Main Street date back to the early 1800s when the original buildings were burnt down in reprisal for the defeat of Government forces in the Battle of Saintfield.

“The Main Street is dotted with several notable and listed buildings like the Orange Hall, AYC Hall and McRoberts but some have seen better days.  Our meeting with the Minister was focused on finding ways in which the Department could work with the Saintfield Development Association and property owners to develop ways to bring these buildings back into use and more accessible to the community.

“The meeting with Minister Attwood was extremely useful.  He was appreciative of the efforts of the Saintfield Development Association to improve the village and the work they have done on projects like the proposed Community Centre and regeneration of The Square.  During our meeting, the Minister identified several possible sources of funding and support for the improvement of Saintfield’s built heritage.  These will now be pursued by the SDA in partnership with officials from the Northern Ireland Environment Agency with a view to bringing forward some viable proposals.

“Although it isn’t part of his portfolio, the Minister also discussed the need for the regeneration of the Main Street including the road surface and footpaths. I very much welcome his commitment to work with Saintfield in partnership with other government Departments like DRD and DARD to realise a major regeneration scheme for Saintfield.”

Mr Hamilton added: “Saintfield is a place with huge potential. It is rich in heritage and its built environment tells the story of Saintfield’s role in history.  If we can realise that potential then we will reap social, economic and cultural benefits for the area and I hope that as a result of this meeting we will be able to advance that aim”.