Addressing a number of elected representatives and business people in Ballymena, Finance Minister Simon Hamilton MLA has talked about his firm belief that the impending reform of local government in Northern Ireland presents a once in a lifetime opportunity to better shape the communities that councillors are elected to serve.

The Minister was invited to meet with a number of people to hear at first hand how the business community in Ballymena are working together to grow the local economy. Addressing invitees, Simon Hamilton said: “I have yet to meet a councillor who didn’t want to possess the ability to exercise the sort of powers the Review of Public Administration (RPA) will bestow upon our new 11 Councils. [caption id="attachment_41113" align="alignleft" width="220"] 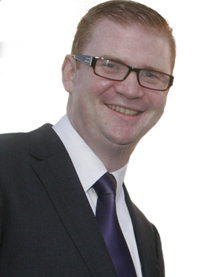 “The boundaries have been agreed. The legislation is passing through the Assembly. Now councillors and officials need to be thinking about how they can use their increased borrowing powers and bigger rates bases to invest in larger, more significant regeneration projects located where they deem most appropriate, using their planning powers. If they fail to do this, then the chance to take full advantage of what the RPA can do for the people living within our new local authority boundaries will be missed.

“I don’t think it’s too extravagant to say that we sit at the dawn of a new era of huge opportunity for local government in Northern Ireland. But reform shouldn’t stop at our town and city halls. It must come to Stormont too.

“I have long supported a significant reduction in the size and scale of the structures at Stormont. In these times when government budgets are under pressure and will remain so for years to come, how can we justify in a society as small as ours, 12 central government departments? Is any MLA prepared to justify to their constituents the maintenance of a bloated political bureaucracy at Stormont whenever times are so tough?

“More often than not, the debate about the size of our government has focused on the savings that streamlining Stormont could secure. Cutting costs is important but equally critical is creating structures at Stormont that are cohesive and, above all, capable of delivering the results we demand.”

Referring on the need to reform the Minister added: “So, this isn’t simply about smaller government. It’s about achieving smarter government.

“Everywhere you turn in the public sector, there are examples of where realigning responsibilities within fewer departments would result in better government.

“Shrinking the size of Stormont would certainly culminate in us saving millions of pounds each and every year but the bigger, better prize is, I believe, a more joined up and collaborative central government structure which would invariably increase the effectiveness of our government.”

“Not only would slimming down the size of Stormont streamline and speed up how we deliver public services, it would also remove many of the impediments that prevent us from having as responsive a government as we’d like.”