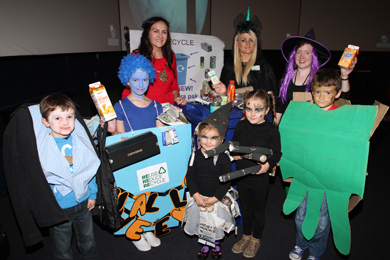 Down District Council Chairman Cllr Maria McCarthy with winners in the competition run by the Environmental Dept during the Adams Family free showing in the St Patrick Centre. Included are overall recycling competition winner Caiomhe Galbraith from Downpatrick with Jack and Ben Sloan, and Alice and Lily Ferguson coming next.[/caption]

These events, organised in conjunction with PCSP, PSNI neighbourhood teams and local community groups continue to grow attracting increasing numbers of attendees each year. The PCSP are delighted to work in co-operation with such committed community groups who work tirelessly with their PSNI Neighbourhood Teams on a cross community basis to break down the barriers and create harmony in their towns and villages.

Event organisers have been vocal in their praise of the PCSP initiative.

*  Andrew Steenson, Chairman, Langley Road Community Group siad that “I wish to pay tribute to the PCSP and its officers for their help and support for this cross community event which goes from strength to strength.  The very popular and successful event which is run in partnership demonstrates what can be achieved by communities working in harmony. Damien Travers, Chairman of the Hillcrest Drive Residents Association, who jointly organised the event, said “We are very grateful for the support of Down PCSP towards this well supported cross community event which brings people together in a spirit of celebration.” 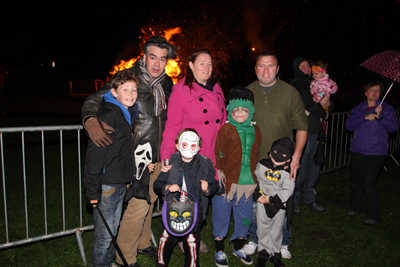 The Miskelly family at the Crossgar bonfire.[/caption]

*  Felix Blaney, who helped organise the Castlewellan beacon said “I am delighted with the success of our first Halloween Beacon and the community support the event received. I would like to thank the PCSP and its officers for making the cross community event such a success”.

*  Gareth Revels, Event Organiser of the Crossgar Beacon stated “This annual cross community event was a great success despite the weather, attracting people from near and far. Thanks to Down PCSP for supporting this event and for all the help and support given by its officers.”

Dan McEvoy, Chairperson of the Downpatrick Community Collective said: “The various communities within Downpatrick came together and delivered another wonderful Halloween event which was well attended and successful. Thanks to all the parents who so meticulously ensured their kiddies were very appropriately dressed for Halloween, my thanks to Chris Hazzard MLA and Pete Smith for their help in selecting our fancy dress winners.

“Despite the odd shower the good folk of Downpatrick came along and joined our hard working committee members to ensure another town centre Beacon event was a success. Thanks to Down PCSP and all those who assisted in any way, the Community Collective looks forward to next year’s event!”

Down PCSP Chairman Councillor Willie Clarke added: “It pleases me to hear such positive comments on one of our initiatives that not only is truly cross community in nature but also creates an opportunity for people to celebrate Halloween in a safe environment. Having attended a few of the beacon events myself I was impressed with the large numbers of people who came along and were clearly enjoying themselves immensely.

I commend the dedication and enthusiasm of the local community groups and everyone who continues to work throughout the year for the benefit of their local areas.”

The beacon project is jointly funded by the Community Safety partnership and the EU’s Peace III programme, managed by the Special EU Programmes body and delivered by the North Down, Ards and Down Councils cluster.

Councillor Stephen Burns has praised as a success, the Beacon Halloween event which took place in Castlewellan Upper Square on Friday evening.

Cllr Burns said: “The beacon event was a great success with up to 500 local people of all ages enjoying the nights festivities. I want to thank those in the community who organised this event, those who secured funding and indeed those who worked hard on the night to ensure it was a success. “Events like this go a long way in diverting anti-social behaviour and bringing a family friendly atmosphere to the area during the Halloween period. Hopefully we can build on this event and make it even bigger and better next year.”    ]]>