<![CDATA[ <p style="text-align: justify;">A proposal to set up a ferry from County Louth to Greencastle in County Down has run into deeper water.

For the last three years the voluntary local residents group in Greencastle (GARG) has been driving a campaign to protect the area from being what they claim as being “irrevocably destroyed by a ferry proposal.” 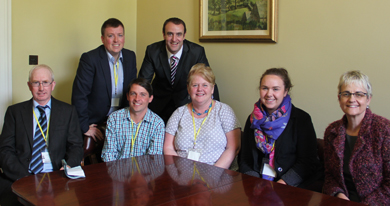 The ferry proposal includes building a ferry terminal facility adjacent to 80 Greencastle Pier Road, Greencastle in Co Down, to allow operation of a vehicular ferry across the mouth of Carlingford Lough. The proposed works include the construction of a reinforced concrete suspended pier (58 metres long), supported by vertical tubular piles and a reinforced concrete slipway (70 metres long) to allow vehicular access to the Ferry and 12 berthing piles with fenders and steel gangway to facilitate berthing and tying up of vessels overnight.

It will provide new access and hardstand for parking and queuing, a kiosk for office and ancillary staff facilities, and will include drainage and landscape proposals. Also, there will be an upgrade and widening to parts of the Greencastle Pier Road . There will also be provision of passing bays,  floating navigational marks anchored to the bed of the Lough and laid at the edges of the navigable channel to delineate appropriate channel boundaries or to mark shallow rock outcrops and provide for safety of navigation.

Christine Gibson, GARG spokesperson, said: “GARG delivered a presentation led by the group chairman Diarmuid Cahill supported by slides and a video, sharing their concerns and issues with the Environment Minister.  South Down MP Margaret Ritchie also showed support for the Group by giving examples of issues that she herself has highlighted as detrimental to Greencastle and the surrounding area.

“GARG initially explained that cross-border relations are a positive step forward and projects like this should be a worthwhile investment. However, it is the site of Greencastle, in particular, that is in question and not the development of a new link between the North and South.

“During the presentation, a number of  fundamental issues were highlighted to the Minister such as tourism… the reality is that this proposal may have a negative impact on Greencastle’s tourism. The construction of a 150m concrete pier will affect the biodiversity and ecosystem of the sealife including shellfish, seals and terns.

“The increase in traffic of up to 1000 cars per day would deter walkers, cyclists and horseriders and possibly deter the film crews (from ‘The Fall’ and ‘Our Robot Overlords’) from visiting. The site of the concrete pier would fall in plain view between the castle and the beach, ruining the landscape aspect” Rory Thompson, GARG member added: “The Proposal does not make any reference to protecting our endangered indigenous wildlife”.

Mrs Gibson also said: “Furthermore, the absence of independent surveys carried out on the Pier Road and surrounding roads leading to Newry and Kilkeel is als0 of concern.  The Pier Road is not constructed to accommodate a consistent high flow of two-way traffic and the lay-bys suggested by the Applicant as a solution would only cause bottle necks of traffic of up to 40 cars.

“The road system leading towards Kilkeel and Newry have not been addressed even though the 1000 cars per day will use these in both directions and there are many narrow ‘pinch’ points that cannot accommodate such an increase. The one proposed plan received for the Pier Road actually shows the omission of a ruin that houses a bat roost. Bats are a protected species and as such, their habitats are also protected.”

Niall Cunningham, a Greencastle farmer and committee member who attended the meeting, said: “I will be directly affected by the traffic flow because of moving my livestock across the potentially busy road on a daily basis. My farm leads out to the road and various large tractors and machinery need time and space to manoeuvre, which will face the traffic head on. My fields are also on either side of the narrow Pier Road and to date, the Applicant has not said one word to me about road widening or access or any potential impact this will have on my livelihood”.

Also the sustainability of the ferry project was challenged explained Mrs Gibson. She said: “The proposal states that the ferry will be used throughout the year and will be self-sustaining. GARG highlighted that at the most, visitors/tourists would use the ferry for up to six weeks in the year. The cost and journey times were also discussed at the meeting and showed that there was no cost or time benefit for using the ferry against the road between Dundalk and Newcastle.

“And furthermore, the proposal for the North (ie Greencastle) does not make any reference to commercial vehicles and only refers to visitors/tourists as potential users of the ferry. In contrast, the Proposal that was recently passed in the South (at Greenore) has included commercial customers.

“There has generally been a lack of imagery supplied for the ferry project generated by the proposer. In such a grand project of this scale, the applicants have crucially neglected to provide any form of sketch or artist’s impression to demonstrate the impact of its construction. GARG had developed its own for the purpose of the meeting, taking into account the dimensions proposed.

“The choice of Greencastle was determined because of its proximity to Greenore. In fact, other locations along the north-side of Carlingford Lough are equidistant or indeed closer than the planned route between Greenore (around Green Island) and Greencastle.”

After the presentation delivered by Mr Cahill, Minister Durkan complemented the Group by saying that the “presentation was a very thorough and professional report of findings and I can see that you are very passionate about where you live”. The Minister then provided an update to residents on the status of the planning application, advising that all consultation responses had been received except one. Once the last one is processed, it is expected that the application will proceed to the decision phase.

The GARD representatives also invited DOE Minister Durkan to visit Greencastle after he was shown a video of its unspoilt, tranquil landscape, the iconic Norman castle and motte. Minister Durkin acknowledged he would be keen to visit the area.