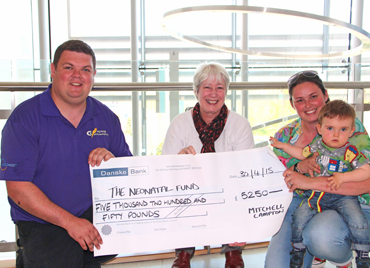 Gareth, Sarah and Mitchell Campton presented the Neonatal Unit at The Ulster Hospital with a cheque for the fantastic amount of £5250. This money was raised through an event organised by the family held at the La Mon Hotel.

The event took mass amounts of planning and a lot of favours but it was all worth it as they had a very successful night. Everyone had a fantastic time, including staff from the Neonatal Unit. The event raised £10,500 in total which was split between Marie Curie Cancer and The Neonatal Unit in the Ulster Hospital.

The Neonatal Unit held a special place in the their heart as they spent two weeks in it when Mitchell was born. They could not be more thankful for the fantastic staff in the unit who were “always there for a chat at 3 or 4 in the morning.” Mitchell is now 15 months old and a happy, healthy and lively boy.

Neonatal Manager, Marian Campbell said, “I am so happy to see the Campton’s again. It is so touching that a family can be with us for such a short period of time but it has a lasting impact on their life. We are so thrilled with this contribution and it will be put towards a specialist cot for the unit, something we really need that will be a great help to families in the future.”