<![CDATA[ <p style="text-align: left;" align="center">ALMOST 5,000 free tickets for Lyric Theatre shows have been given out through Audience Northern Ireland’s Test Drive the Arts project since the theatre was rebuilt in 2011, it has been revealed.

The initiative is to incentivise first time attendance of the arts at a wide variety of venues across Northern Ireland.

To mark the Lyric’s second anniversary, a further 1,000 tickets have been released for the three productions which complete the Lyric’s Spring/Summer season. This will give anyone who has yet to enjoy the new theatre a chance to see a Lyric production at no cost. *   Love, Billy by Graham Reid which reaches its last week on the Danske Bank Stage finishing on Saturday 25 May *   New romantic comedy Can’t Forget About You by the Lyric’s former Playwright-in-Residence, David Ireland which runs from 23 May to 16 June in the Naughton Studio *   And the Marie Jones’ comedy Weddins, Weeins and Wakes which opens next month on the Danske Bank Stage. [caption id="attachment_39165" align="alignleft" width="300"] 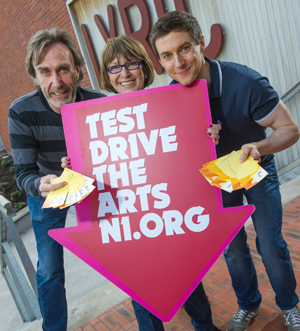 Why not try out a Marie Jones comedy on the free ticket give-away from the Lyric Theatre on the Test Drive the Arts scheme.[/caption] One Test Drive user said: “I brought along my mother from Tyrone who had never been and rarely comes to Belfast for cultural events, she was equally impressed by the experience.  You’d be a fool not to give Test Drive the Arts a go, not only were the tickets free but the whole experience was thoroughly enjoyable…” The Test Drive scheme is just one part of the Lyric’s audience development strategy. Over the past two years since the theatre reopened, 2,007 Super Saver tickets and 1,551 community group tickets were sold at just £5 making the Lyric affordable to audiences regardless of their income. Lyric Artistic Director, Richard Croxford, said: “We are delighted to work with Audience Northern Ireland’s Test Drive the Arts project as it has proven to be an effective way of introducing theatre to people who would never usually attend. “We are also acutely aware of the demands on household finances in the current climate and have introduced a number of recession-busting concessions and discounts to suit everyone’s pocket so that theatre is affordable for all.” To get your free tickets for a Lyric production or other venue sign up to the scheme by going to the website www.testdrivetheartsni.org You have to be aged 18 or over and live in Northern Ireland to be eligible, you can only apply once for the tickets and to a venue you haven’t been to in three years.]]>