<![CDATA[ <p style="text-align: justify;">Down Arts Centre’s autumn live event programme kicks off with a powerful compendium of the finest stories and poems from the trenches of the Great War, performed by award-winning solo performer, Guy Masterson, in his new production, Anthem for a Doomed Youth at 8pm on Saturday 13 September. 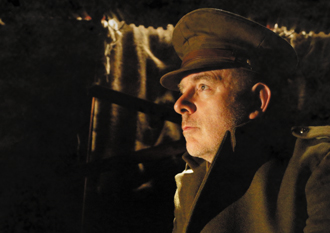 A World War performance blasts off the Down Arts Centre autumn programme.[/caption]

Anthem for a Doomed Youth, compiled and performed by Guy Masterson, is a powerful compendium  from both sides of No-Mans’ Land. From our greatest war poets Wilfred Owen, Rupert Brooke and Siegfried Sassoon and excerpts from Erich Maria Remarque’s All Quiet on the Western Front and the now mythical Christmas Truce.

This compendium leads us into the lives and emotions of the soldiers of the trenches of WW1, providing a deep and compelling insight into the nature of war, sacrifice and honour.

Guy Masterson has established himself as one of the world’s foremost solo performers with globally renowned titles such as (see website) Under Milk Wood by Dylan Thomas: www.theatretoursinternational.com

He said: “I have always been moved by stories of the Great War; books, films and poems. But, other than All Quiet on the Western Front, we rarely hear the experiences of our foes. How similar were they to ours? I wanted to investigate the entire poetic landscape from both sides of No-Mans’ Land.

“We are all familiar with the words of Wilfred Owen and Siegfied Sassoon, but rarely do we hear those of Isaac Rosenberg or Erich Maria Remarque. By reciting the poems and acting out the stories, I am hoping to bring life to the words on the page. To make them dance and sing… to give us a deeper understanding of what life was like for those sent to lay down theirs for ours in the greatest conflagration of our history.”