BELFAST Waterfront and Kaleidoscope present Imagine Arts Festival for Older People – the first event of its kind to be held in Northern Ireland – on Saturday 8 and Sunday 9 June.

Featuring a host of arts events, performances and workshops for the over 50’s, this unique two-day event celebrates older people’s enjoyment of and participation in the arts and aims to encourage more mature people to get involved. 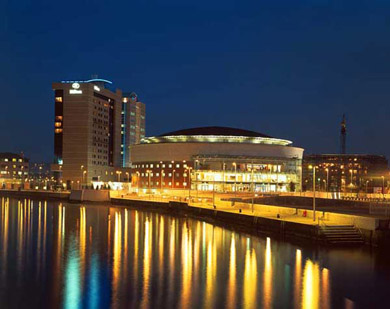 The Belfast Waterfront and kaleidoscope are hosting an arts’ festival for older people.[/caption]

The Festival Programme also includes arts workshops, giving participants the chance to try something new from a diverse range of activities from ballroom dancing to digital photography. Many of the workshops are completely free!

The weekend draws to a momentous close with The Big Sing! – a spectacular concert finale featuring the award winning St Agnes Choral Society performing songs from their recent smash hit, The Sound Of Music, as well as a host of musical favourites. Sing along to the songs!

Belfast is officially the UK’s friendliest place for older people

Belfast is currently working with all key agencies and older people to create an ‘Age – friendly Belfast’ and we were delighted when The Friends of the Elderly ‘Frienderly Town Survey’ named the city as being the best possible place to live for older people. The survey was based on a range of factors related to wellbeing in later life, including respect, facilities, safety, environment, and whether residents would recommend their city to others. Older people in Belfast feel more satisfied with opportunities open to them and their social inclusion in the city than anywhere else in the UK.

Councillor Bernie Kelly, Chair of Belfast City Council’s all party Older Peoples Group, commented: “the first ever Imagine Arts Festival helps to further reinforce Belfast’s position as the UK’s friendliest place for older people. Counting for more than 30% of the total population in Northern Ireland, the over fifties represent a very important and hugely influential collective voice. People don’t stop going out and enjoying themselves when they reach a certain age – indeed the arts and leisure pursuits of many people increase greatly as they get older. This festival reflects the huge diversity of interests and activities that older people do and can enjoy, and I would encourage as many people as possible to come along, meet friends, make new friends, and above all, have a great time.”

Belfast Waterfront Arts and Community Coordinator, Mark De Conink said: “We’re delighted to be presenting Northern Ireland’s first ever Arts Festival for Older People with our partners, Kaleidoscope. Inclusivity, innovation and choice are bywords of our arts and community programmes at the Waterfront and this fantastic two day festival promises to deliver on all of these fronts. With such a wide variety of events, performances and workshops taking place this really is a great opportunity for people to join together, get creative and be inspired!”

Kerry Rooney, Artistic Director of Kaleidoscope, added: “We’re thrilled to be working with the Waterfront to deliver this incredible event. The arts have an amazing capacity to change lives and unlock the door to a new world of imagination and discovery. The Imagine Arts Festival is a chance for older people from across Northern Ireland to engage with a whole range of art forms, to rediscover a lost passion or even to find a new one and to make new friends and explore their hidden talents. It’s about time seniors’ involvement in the arts was recognised in this way.”

Tickets for festival events are available online, from the Waterfront and Ulster Hall Box Offices and by calling 028 9033 4455