Comber will celebrate its finest food during the first ever Comber Potato Festival on Saturday 29 June 2013. 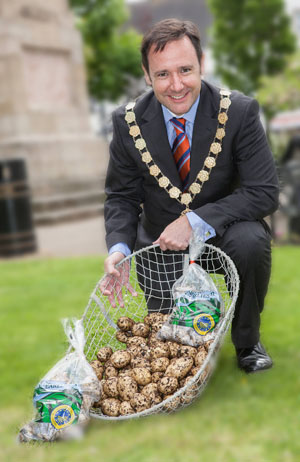 Ards Borough Council Mayor Councillor Stephen McIlveen launches the Comber Potato Festival.[/caption] The one-day festival will mark the success of the world famous Comber spuds, which achieved EU ‘Protected Geographical Indication’ status in January last year and are the only variety of potato entitled to the name ‘New Season Comber Potatoes’ or ‘Comber Earlies’. Organised by Ards Borough Council in partnership with Food NI/Taste of Ulster and Comber Early Growers, the event provides the perfect opportunity to sample the Comber Earlies at their very best and will also feature a host of other culinary delights from local food producers including cheeses, chocolates, pies and desserts. Top chefs Danny Millar, Niall McKenna and Paula McIntyre will be demonstrating how best to cook Comber Earlies and make the most of the unique flavours, while children will get to use the potatoes in creative workshops.  Launching the event, Mayor of Ards Councillor Stephen McIlveen, said the harvest of the first new season Comber potatoes was an important time in the Northern Ireland food calendar, and added: “Comber Earlies are more than humble potatoes. Their harvest is eagerly anticipated by retailers, professional chefs and home cooks alike, and their protected EU status not only highlights the unique climate and geographic position of Comber which produces the distinctive earthy, sweet and nutty flavour, but also the expertise and dedication of the farmers who grow them. “I’m delighted that the potato and all that it symbolises will be showcased at the festival on 29 June and look forward to welcoming locals and visitors alike to Comber”. Other entertainment on the day will include a vintage tractor display, live music, the World Police and Fire Games Roadshow, The Ark Open Farm and a treasure hunt. Local businesses will also be joining in the celebrations with Comber Early themed shop window displays.   For further information visit www.ards-council.gov.uk ]]>