<![CDATA[ <p style="text-align: justify;">The All-Party Group on Fairtrade (APGF)  is pleased to announce its recent formation and cross-party support to achieve Fairtrade accreditation for Northern Ireland, as a devolved region. 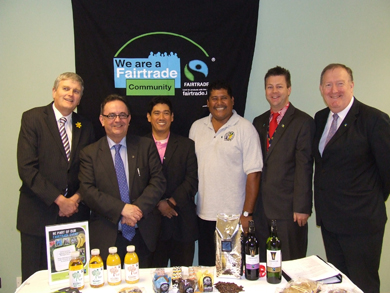 South Down MLA Jim Wells, left treasurer of the All-Party Free Trafe Group pictured with reopresentatives at the recent meeting,[/caption]

Secretariat support for the APGF is provided by the Consulate for St. Vincent and the Grenadines to Northern Ireland. This support lead to the initiative and establishment of the Group and is on-going.

The APGF is a cross-party group of MLA’s which was established on February 4, 2014 and is currently chaired by Pat Ramsey MLA.

The agreed purpose of the APGF is to create a mechanism for representatives involved with Fairtrade (Local Government, Fairtrade Steering Committees Non-Governmental Organisations (NGOs), universities/colleges, schools, places of worship (churches) and businesses) to discuss and lobby with politicians on issues of Fairtrade with the primary objective to achieve Fairtrade accreditation for Northern Ireland, as a devolved region.”

All cities and at least 55% of local authorities to have Fairtrade status.

All local authority areas and at least 55% of towns with a population of 6,000 or more to have active Fairtrade groups working towards Fairtrade status.

At least 60 per cent of higher education institutions to have active Fairtrade groups working towards Fairtrade status.

Parliament/Assembly and Government to use, promote and make available Fairtrade products internally, and to actively promote Fairtrade Fortnight each year.

Fairtrade to be promoted in schools through the curriculum, procurement and other possible means.

Pat Ramsey MLA said: “Northern Ireland is showing how a region can take steps to bring about big changes globally. In the case of Fairtrade we are making a huge impact on the lives of developing world producers and their families. We look forward to the challenge and vision of achieving Fairtrade accreditation for Northern Ireland, encouraging all stakeholders, to embrace this initiative and make Northern Ireland a Fairtrade region.

Fairtrade provides a commitment to enable the most disadvantaged developing world’s small-scale producers to successfully trade in the global market in order to alleviate poverty, working towards the Millennium Development Goals (MDG’s), through purchasing and procurement of Fairtrade certified products.