THE beaches of the Lecale coast may be in for some close attention in the coming months.

Councillor Cadogan Enright (Independent) speaking at the full chamber of Down District Council proposed a motion not just about ensuring that residents on the Lecale Coast have the same level of sewage treatment on local beaches as residents on the Gold Coast, but  also about improving the tourism product in the Lecale area and the reputation of the Down District generally.

He said: “It is clear that Down Council could propose Lecale beaches at Kilclief, Killard, and Ballyhornan  as candidate beaches since we maintain their car-parks and service the area. Indeed Coney Island and Killough look possible too.

“They are all on the Ulster Way  and some are on the St Patrick’s Trail. 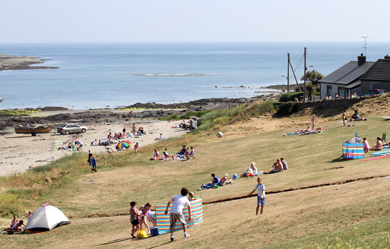 Councillor Cadogan Enright received unanimous support for his proposal to improve the quality of water quality on Lecale’s beaches.[/caption]

Councillor Enright said: “The key difference between the Gold Coast (North Down) and the Lecale Coast from NI Waters point of view is that there are a number of bathing waters identified under the Bathing Water Directive along the Gold Coast.  These include Helen’s Bay, Crawfordsburn, Ballyholme, Groomsport and Millisle.  There are currently no designated bathing waters along the Lecale Coast.”

“The motion follows six months of Freedom of Information (FoI) requests to find out why the proposed new sewerage works in Ardglass was downgraded compared to original expectations.

“Some of you may remember that seven years ago it was proposed that the new Ardglass sewerage works should also have the Lecale villages of Killough, Coney Island, Chapeltown and Ballyhornan piped to it, in the same manner as the new sewage works on the Gold Coast has gathered up all the sewage from places like Hollywood, via Bangor and Groomsport all the way to Millisle and Donaghadee and treated to the very highest level before being discharged.

“However, my Foi’s to the Northern Ireland Environment Agency and NI Water’s  Water Management Unit have revealed that NI Water is operating to a higher standard on the Gold Coast as nearly all their beaches have been identified as ‘bathing waters’ under the EU Directive.

“It was also revealed that it was operating to a lower standard in on Lecale’s beaches as none of our beaches were identified as bathing water beaches.  (NI Water is not correct about this, as both Murlough and Tryella are recognised bathing waters).

“Therefore, the new sewage works in Ballyhornan will not pipe sewage to Ardglass as expected, but will simply sieve the sewage for larger objects before discharging near the beach at Gunn’s Island as at present.

“The FoI reply from the Water Management Unit made a number of key points:

*   If a beach was identified as a candidate bathing water BUT had a low standard of water quality – NI Water would be required to improve the quality of discharge at that location.

*   The reply gave an example of Newcastle where the water quality did not meet EU standards in 2001, 2005, 2007 and 2010 resulting in designation under the EU directive which forced improvements to water treatment

*   In order for the Council to propose a beach as a candidate bathing water under the EU directive Council would have to bring forward a 4 point plan that can be summarised as including:

– that the beach is not dangerous

– and detail the public expectations about the beach.”

Councillor Dermot Curran who also supported the motion said: “The sewage system being built at Ardtole near Ardglass that was originally planned had been modified due to funding constraints but we do need to work with the constraints of the European Directives. There should be np raw sewage pumped from any beach or location in Down into the Irish Sea.

“The £11 million treatment plant opens up next year and thi swill be goo dnews fro Ardglass. However, we will have to look at these other areas in teh future.”

Councillor Eamonn O’Neill described this as a “useful motion” and added that Council would need to check out exactly what can be done in maintaining these beaches as there may be considerable cost implications involved for the ratepayer.”

Councillor Stephen Burns added: “I fully support this motion and a key part of attaining clean beaches is water quality. We can in fact look at this issue piecemeal and if we are not happy with a particluar beach we can relay that to NI Water.”

I summing up, Councillor Enright added that a management plan for the beaches could involve local control by community groups or agencies in the area as a possible model.

It was agreed to take a phased approach to looking at local Lecale beaches and that each beach would be separately costed by the Recreation Department.