<![CDATA[ <p style="text-align: justify;"> The Newcastle Arts Festival got off to a brilliant start last night with a tremendous performance by Downshire Brass in the Annesley Hall.

This festival has been going now for four years and has established itself as as an annual ‘must see’ by art lovers. It offers a wide variety of quality events organised by a hard-working committee managing ‘creatively’ on a shoestring. 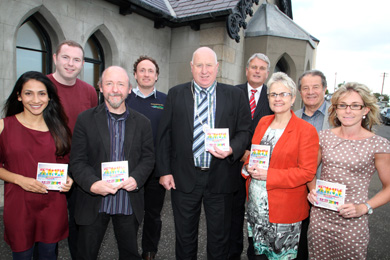 Nick Mac, NAF chairman speaking at the launch said: “I would like to welcome you all to the Newcastle Arts Festival 2014 and wish to share the goodwill from all our committee members who have worked tirelessly to puit this arts programme together.  We have assembled a very significant amount of talent for this relatively small but perfectly formed arts festival.

“We have made huge efforts to ensure that you all enjoy the next few days. There is an abundance of talent and skills and I am sure that before the weekend is out more will come to the surface. This is our vision and we are proud to present our programme to you. The arts is a very significant part of the creative economy and the Newcastle Arts festival is a great platform to showcase local talent.

“We are delighted to open the festival with the fantastic Downshire Brass who are Northern Ireland champions. I hope you all enjoy the show and the weekend of arts ahead.”

The evening’s entertainment got of to a start in the packed Annesley Hall as Downshire Brass under musical director Michael Alcorn raised the roof.  They played a selection of numbers, some with soloists. They started with ‘Strike up the Band‘, a lively number, followed by Sway, then Cry Me a River solo-ed by Amy Wilson on the Flugel Horn which Michael Buble himself would have applauded. 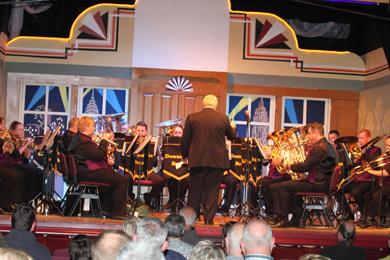 The Downshire Brass in action in Newcastle.[/caption]

Candyman then was performed to precision A cornet quartet delivered an impeccable Mr Sandman and a range of melodies we are all familiar with ensued. Soloist Paul Cooper played a brilliant and evocative rendition of Donegal Bay then the pace picked up with a medley of tunes from Abba.  Downshire Brass played over 20 tunes in total and captivated the audience.

The Downshire Brass is one of Northern Ireland leading bands and performs at venues far and wide. They performed a range of music from traditional marches to big band numbers to the classics and popular music. In 2015 they will be representing Northern Ireland in the European brass band championships in Freiburg in Germany.

On Friday evening, come along and enjoy Coole Lady, an entertaining one-woman show written by Sam Cready about Lady Gregory, the founder of the Abbey Theatre in Dublin, and on Saturday evening, Dickens at the Ulster Hall brings the audience back to Dicken’s visit to the Ulster Hall in 1867 when the hall was just completed.

The Newcastle Arts Festival involves poetry, contemporary dance, painting on silk, a comedy workshop, Irish dancing, and much much more.