<![CDATA[ <p style="text-align: justify;">Haddington Road trained by Dot Love made virtually all the running to readily claim the opener at Downpatrick on Friday night with Andrew Mc Namara aboard writes Joe Kavanagh. 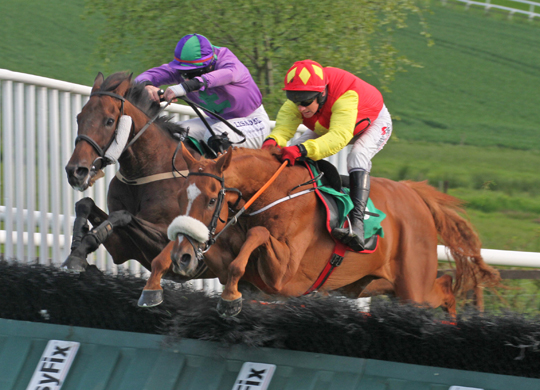 Be Seeing You, trained by Gordon Elliot and ridden by PAul Carberry nidges ahead past Halls Bridge in the Downpatrick Looking Goog Handicap Hurdle.[/caption]

The winner briefly lost his position on the final circuit but was again in the lead before the top of the hill and success assured prior to the final two flights. The winning trainer said ” He was always a nice horse and is one for the future and will make into a good chaser. He might stay hurdling meantime and possibly go chasing at the end of the summer – it will depend what the handicapper does. The owners have bred a lot of good horses.”

Trainer Gordon Elliott maintained his magnificent strike record at the course when Be Seeing You partnered by Paul Carberry easily landed the long distance handicap hurdle to the delight of the large number of members in the “Call It What You Want” who reside beside the trainer at Trim.

Elliott said: ” He won well… he’s in again at Perth and Roscommon at the start of next week and I’ll decide later what happens.” Asked regarding the funding crisis at the two local tracks, the leading Downpatrick trainer said: ” I hope it gets sorted – they deserve it – Downpatrick is second to none the way they look after owners, trainers and jockeys.”

Navan trainer, Gavin Cromwell maintained his current run of success which included a double last week with As de Pique (Down Royal and Punchestown) when Paul Carberry completed a double on the night when claiming the other handicap hurdle on the card. Cromwell said: ” I quietly fancied him coming up. We’ll stay in or around that trip with him and he wants that ground (good). The genius of winning jockey, Paul Carberry’s talent was witnessed doubly with the top rider coming from near last in each race to lead at the final flight.

Carberry at his brilliant best and Elliott clocked up another hat trick at the venue when the previously ultra frustrating Fort Smith took the beginners chase after Edeymi which was in contention fell at the penultimate fence. Gordon Elliott said: “Paul said nothing would have beat him tonight…  he has a mind of his own.”

Bills Official sprang a 33/1 surprise in the handicap chase. Trained by Martin Hassett and partnered by his nephew, Shane the winner made most of the running to score from the locally trained, Finea. The winning trainer said: ” I was confident coming up. We used his stamina tonight. We have only four in training and three have won… we’re delighted as Shane loses his claim on the winner.”

The Jim Dreaper trained El Grande – owned by the Conway family from Draperstown having finish runner-up at the last fixture gained compensation when easily landing the hunterchase with recently crowned Ulster Champion point to point rider, Noel Mc Parlan in the saddle while for the third time on the evening Waterville Road ridden by Katie Walsh denied a local winner with Lord De Beaufai finished a narrow runner up.