<![CDATA[ <p style="text-align: justify;">Following his eight-week work experience with Down News, Tony O’Prey from Crossgar is going onwards and upwards writes Aidan Fallon, a trainee journalist at Down News.

Tony, a past member of St. Colmcille’s High School in Crossgar,  said he realised his passion was photography at an early stage in life and it became a major drive even as a pupil in secondary school. After leaving school he went on to study in several photography courses before embarking on his dream course… a degree in art photography at the University of Ulster in the Belfast campus. 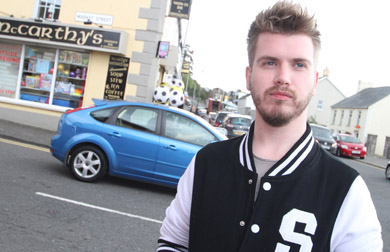 Tony O’Prey, a photography graduate from Crossgar, spent eight weeks on a HJ O’Boyle work placement with Down News.[/caption]

Tony said: “While completing my degree,  I was part of a freelance photography collective called ‘Belfastphotofactory’, and even though it was one of his greatest hobbies to indulge in, it soon proved extremely difficult to make ends meet in that line of work.

“I’ve exhibited my work in a number of top galleries, and understand what is involved in all of that, but I felt I should get some more commercial experience. After I graduated from the degree photography course, I went through the H J O’Boyle scheme in Downpatrick to try and find  a position in a commercial business. I was lucky in being taken on by Jim Masson, owner of  Down News. This experience was very beneficial.”

Tony explained that working in the Down News office at the Down Business Centre on the Belfast Road near Downpatrick and going on a wide variety of news’ photoshoots has helped to give him a much more harder and focussed view of work in general, and photography in particular.

He said: “Down News has provided me with a lot of different skills and experiences in a short eight week period I was there. It was a bit of a reality check. I really felt like what it was to be a press photographer. I shadowed Jim on many events and photoshoots and realised the pace and intensity of the work that he is involved in. Press work is basically reportage and I was soon in a world of photography which was less art oriented and more functional and results focussed. Jim would say, ‘Always make sure you can come back with a picture. And when you have done that, come back with a better one’. But art does have its place and Jim fully recognises the role of art in photography.

“Not only has the Down News team  been helpful and supportive but they have helped me see that there is more to being a good photographer than simply having the qualifications. I realised that a photopgrapher also has to have good communication and people skills, as well as being able to be technically proficient with cameras and equipment and understanding the computer software involved.

“One of my jobs over the eight weeks was to tidy up Jim’s vast collection of  photos. He has around 35,000 that he has taken over the past 14 years and I helped put them onto a couple of external storage drives for back up. It is an incredible history of the people of the district.

“I found it very interesting too that he can work with people of all persusaions and backgrounds with ease and is very apolitical in the way he runs Down News, not favouring any politcal grouping.

“Being in the coal face with Jim has certainly broadened my view of life and toughened me up to the point I am more  results focussed now and less focused on aesthetic interpretation. I never fully understood the nature of press photography and can now see how it is part of a constant news stream.. I have had (with difficulty) to switch from my art mode to a more functional approach when doing press work, but Jim did impress that I should not throw the baby out with the bath water and I should maintain my individual creativity which is an asset.

“Attending all sorts of events from ‘shooting’ government ministers to dealing with everything from presentations to social events  and sewage spills first hand and communicating with people has helped my confidence and ability in this field.

“Now I can focus on building up my photography website www.tonyoprey.co.uk  which is a key part in moving my business idea forward. Jim signposted me to an interesting business support programme called Bright Idea (www.brightideani.com) which has helped me get my head round acquiring the right skills to take my photography one step further to make it into a successful business. I actually attended the press launch for Bright Idea and felt that this was a simple and flexible programme that would suit me.”

In the future Tony hopes to continue on with his business idea and to make it grow in popularity, as well as sticking to his roots and working freelance and enjoying art photography as hobbies until it one day starts to pay for itself. “It will be hard work I know as photography is a very competitive business, but I will concentrate of my art side, which I am good at, and hope that it all pays off one day. While we are in a recession, it is difficult for the art market to support many artists as this is often seen as a luxury extra.

“I certainly feel more confident after my spell at Down News and I’m more equipped now for the long road ahead.”