Private patients at the Edelweiss Dental practice in Strangford launched in December 2014 are being offered a procedure to replace traditional dentures with a combination technique that can cost half as much as implants.

The revolutionary new bridge work is not only much cheaper than implants but can take much less time to be fully in place and operational and able to bear pressure. 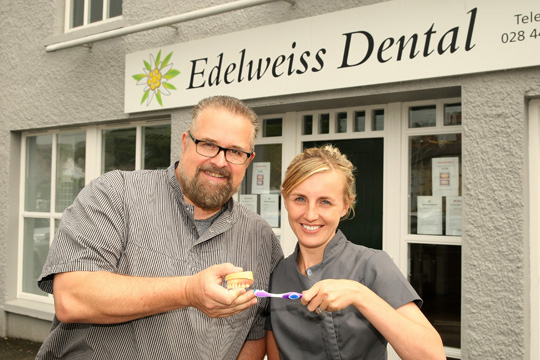 Edelweiss Dental surgeon Klaus Viesteg owner of the Strangford practice Edelweiss pictured with Laura Stewart, Dental Hygienist, outside the new practice. They will be teaching school children and community groups the benefits of good hygiene and the importance of regularly cleaning your teeth. (photo by  Gerard Smyth.)[/caption]

Dental surgeon Klaus Viesteg owns the Strangford practice and has brought the leading techniques involved with him from his home city of Berlin in Germany.

It is rare that the innovative bridge work is offered to patients in the United Kingdom but is much more common in European dental practices.

The technique involves a bridge of dentures being secured in the mouth by anchoring it to a crown or two crowns fitted with special sliding attachments.

This procedure is lauded in Europe for producing a solution to all the usual denture problems and also creating a pleasing and superior aesthetic and functional result.

“The work really produces a result for those patients who do not wish to proceed with expensive implants,” said Klaus. “From first appointment it can be completed within eight weeks compared to six months for an implant bedding in and being able to withstand substantial pressure.

“There is not the surgical procedure involved with implants which can put a lot of people off the idea and, of course, it is much cheaper.”

The German dentist has his special bridges and crowns constructed by dental labs in London and Essen and insists they are a far superior fix than the traditional denture.

“There are no metal clasps to be seen, no need for fixatives and the bridge is secured in one position with the pressure of the attachment transferred to the gums where it belongs.

“The bridge is easily removed for cleaning purposes but can be worn 24-hours a day. I have to say the reaction of patients who have undergone this new bridge work has been very encouraging.

“One lady was actually in tears at being able to say goodbye to her traditional dentures,” he added.

The fresh very European approach to dentistry is evident in the high standards being set by Edelweiss Dental in all areas of its work and in all aspects of its relationships with its patients, both private and National Health.

Klaus takes his time when dealing with his patients and is an believer of explaining to them the procedures to be used and reassures them at all times that pain will be managed effectively and can be eliminated completely.

“That kind of approach is actually very European and most dentists over there, like me here, will just sit down with a patient first and talk everything through.

“People can embrace a phobia, a fear of the dentist, in a second that takes years to get rid of, but a personal, one-to-one approach can help so much in dealing with that.”

As well as this psychological approach to dental work the Strangford practice also follows a very European model in another service it offers… cosmetic work, including face rejuvenation and fillers.

“Again this is something which is more common in mainland Europe than here, but I am really pleased with the uptake in all of our services at Edelweiss Dental.

“I must say too that I have been really pleased with the support being shown to me by the local people and I have felt very welcomed by the people in South Down and the Ards Peninsula,” Klaus said.

One of those people supporting the work Klaus is doing in Strangford is South Down MP Margaret Ritchie. Ms Ritchie, who is a patient at the practice, publically welcomed the improvement it offers to local health provision when she spoke at its official launch and said:  “This new business makes an important contribution to the regeneration of the village and I would congratulate all involved in the project.”