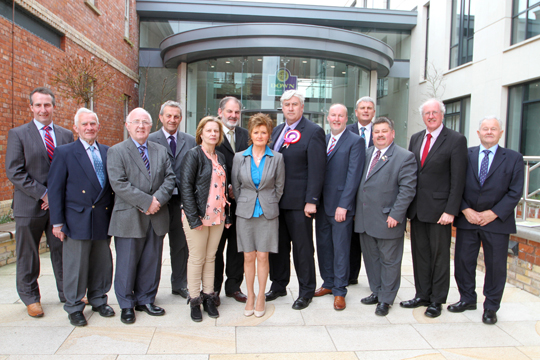 He explained: “Since 2011, I have given one hundred per cent as a councillor for my area which covers the provincial towns of Saintfield,  Crossgar and Killyleagh. It is essential that a councillor makes the effort during his or her term in office and I know from the feedback that I am getting on the doors during my current canvassing that local people are content with my contribution to their community.

“This feedback is the result of years of hard work and commitment over years by myself and my party. I am a great supporter of the principle of local inter-agency meetings as this is the opportunity to deal directly with these agency stakeholders such as the police, NIHE, Fire Service, PCSP, etc and get the problems and issues sorted out on the spot where possible.

“Often it is just the day to day issues that we are engaged in but they are very important to our constiituents. But it is at these meetings that we often find a resolution to a long standing problem. And sometimes where there is a conflict in a community these agencies again have a part to play.

“My record is impeccable in attending these meetings and when councillors come to your door asking for you vote you should be asking them what their contribution has been as some are not so good attenders at all at council meetings.

“I pledged last election that I would give my full attention to my constituents and that is what I have done. I have worked tirelessly on their behalf.

“I do feel that councillors too have a varied record of attendance at the full council meetings and this too is something voters should be looking at. These figures should be available on the Down District Council website. The DUP attendance at full council meetings is second to none. We have an excellent record and voters should recognise this level of commitment when they go to the polls. Some councillors and parties have performed less well.

“After all, when the Newry and Mourne and the Down District Councils merge in  a year’s time after strenuous meetings harmonising the councils from the ‘shadow councils’, there will be no doubt that the local residents and ratepayers will need councillors with stamina who can get the at times difficult job dine in the chamber as well as on the ground in the community. So good attendance is vital for a future councillor and voters have a right to demand it.”