Dundrum Cricket Club face their toughest season for many years this year, and with no overseas coach and many of the younger players sitting exams the club may well struggle to field both of their senior teams in all matches. The club also expects to lose some of their younger players when Down High School go on their rugby tour to America writes Jeffrey Maguire. 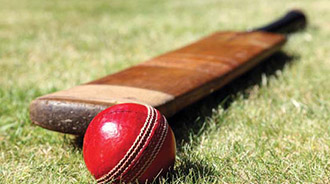 However, the club has a thriving youth section with minis (U-9’s) and teams in under 11/13/15/17 competitions so it will be looking to give some of their talented youngsters a chance to play for the senior teams. The club are actively looking for new members of any age or skill level and everyone is welcome to come along to practice nights at The Meadow.

The club can provide players with the necessary equipment and all sessions are arranged by experienced qualified coaches. If everyone could spread the word to parents and friends in school that would be appreciated as the club needs as many new faces as possible. Free tea and coffee is available for any parents wanting to stay and watch their kids or you could simply go for walk to nearby Murlough nature reserve. There is free Wifi throughout the ground if anyone wants to work in the pavilion.

The First Team start the season away to Saintfield and will be captained by Terry Hutley. The club are building for the future so the emphasis will be on youth and enjoyment and no doubt if the captain can get a good turn out from the talented U-17 team that have been on successful tours to England and Scotland in the last three years they can be competitive .

The club started coaching in schools over 7 years ago and it has been very successful. The hard work put in by the club is starting to bear fruit and young players to watch out for this season are all rounders Stuart Campbell and Greg Hutley along with Eoin Moag, opening bowler Harry Hitchins and the super talented Ulster Rugby young player Andrew Foster.

Of the older players, the club have always had seriously good all rounders and, in that tradition, Joel Maguire and Byron Woodruff can surely have a big impact this season. If seasoned players Gavin Mcnerlin and Lee Connor are available then competition for runs and wickets will be keenly contested and I’m sure last year’s leading wicket taker, Scott Symington, will not go down without a fight when home from University.

After relegation last year, the Second Eleven begin their new season on 13 May with a match against Civil Service NI. Any new faces that would like a game should contact the club or come along to practice. It’s a great way to meet new friends, keep fit, and play competitive sport. Most of the Second XI games take place on a Sunday and are usually 25-30 overs per side.

Dundrum are again planning a Colts tour to Telford and will be hosting Midas Touch CC from India as they push forward with developing cricket in County Down. They are also hoping to run a trip to Scotland for the u13/15 select team.

Other plans for the season include organising a hard-soft ball league involving  local sports teams from Gaelic, Rugby, Hockey and Soccer teams with money being raised for local charity.  Our successful Schools Coaching Programme will also be continuing – where the club run free coaching sessions for 4 weeks in local schools together with a finals day and presentation in The Meadow.

There will also be a summer coaching scheme for youngsters during the school holidays. To raise much needed funds there will be a sponsored walk by the juniors on Monday 29th May and the Dundrum CC Golf Classic is at Downpatrick GC on Friday 23 June.

The club would like thank all the very loyal sponsors which help the club to run lots of the coaching. Anyone looking to join the club, sponsor match balls, or get their business signs up at the club please contact Jeff Maguire for any information on 07730334479.

Practice for seniors is on Tuesday evenings 615/830 pm

JUNIOR PRACTICE is as follows for boys and girls:

How NMD Council Services Are Impacted By Covid-19

October 20, 2020
We use cookies to ensure that we give you the best experience on our website. If you continue to use this site we will assume that you are happy with it.Ok