<![CDATA[ <p style="text-align: justify;">Children from Drumlins Integrated Primary School in Ballynahinch welcomed some VIP guests and proudly showed them round their facilities on Wednesday (27 August).

Baroness May Blood MBE, Campaign Chair of the Integrated Education Fund (IEF) brought friends from the Irish American Partnership (IAP) to see how their support for integrated education had helped provide much-needed learning space at the popular County Down school. 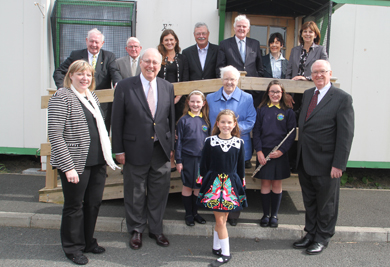 Janice Marshall, front left, with Baroness May Blood MBE, school pupils Charlotte Kerr, Alice Poots and Phoebe Poots and members of the Drumlins IPS board and representatives from the  Irish American Partnership.[/caption]

Joseph Leary, President and Chief Executive of the IAP and Mary McAleer, Director, with a group of IAP members, joined Baroness Blood at the popular school to meet pupils and the principal, Janice Marshall. The visitors were entertained with music and dance and viewed the mobile classroom they had funded, which is used for the school’s breakfast club, literacy and numeracy support and music lessons. It was installed thanks to a $10,000 donation from the IAP.

The Irish American Partnership is dedicated to raising money in support of education, cross-community and job creation programmes in the island of Ireland. It has generously supported the development of several schools which have transformed to integrated status.

Janice Marshall, principal, said: “Drumlins IPS is celebrating its tenth birthday this term, having opened in September 2004 with a P1 class of 12 children at Cedar Integrated Primary School in Crossgar.  It then moved to the  former Plessey factory site and was there for two and a half years. It currently has more than 170 pupils on its roll in Ballynahinch.

“Earlier this year it was announced that the Department of Education had given the go-ahead for new purpose-built accommodation on a nearby site at the former SEELB HQ on Windmill Hill for Drumlins IPS after a decade in mobile classrooms. This is tremendous news for our school and integrated education. We are all now looking forward to moving into permanent building of bricks and mortar. The mobiles that we have received from the SEELB and our American friend shave been very useful and we now hope to expand into our new school quite soon.

“We are waiting for a demolition order on the old SEELB HB premises. Once the building is removed we will be be well on our way.”

The IEF is the charity which provides financial support for the development and growth of integrated education.  Their aim is to enable children to learn together in an environment that celebrates religious and cultural diversity, making integration, not separation, the norm in the Northern Ireland education system.  On the basis of parental demand they continue to support the establishment of more integrated school places, the transformation of existing non-integrated schools to integrated status and cross-community school initiatives that provide meaningful interaction between pupils, parents, staff and the wider community.