From the whistle both teams seemed determined to win the match but a fair analysis of the scoreline would reveal that a draw reflected the true  run of the match.

Both had a number if scoring chances and on a good day the result may have been different. Ardglass on paper were certainly favourites being placed second in the league below Ards Rangers while Mills were holding on to a more lowly position. They will be glad of the away points from this encounter.

The match began with Ardglass pressing the Mills defenders probing for a weakness. Early on Ardglass striker Ricky Kerr broke through the Mills defence and the goal mouth opened before him, but as keeper Steven Keenan rushed out, he struck the ball off the top bar missing a crucial opportunity to take the lead for the home side. 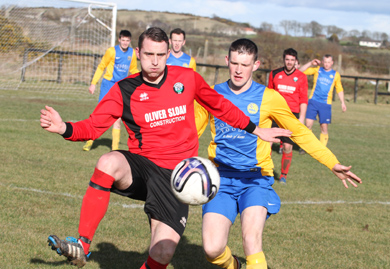 Drumaness forward Colin Manley was showing promise and running through the Ardglass defenders but was blown offiside. The visitors were initially giving as good as they were getting.

The match tended to be played at both ends with Drumaness showing signs of breaking quicker. But it was Ardglass who were getting more efforts at goal. Ardglass defender Brian Crangle hit a great volley at a sharp angle but that disappeared into the side netting.

Ardglass were winning plenty of corners and striker Ricky Kerr was making significant incursion at the Drumaness goal.

But first blood went to Drumaness as Manley swerved past the defender and beat keeper Mark Armstrong to open up the scoring in the 18th minute.

As Ardglass gradually asserted themselves on the game the pressure build up on Drumaness and a flare up between Ian Kearney and Gavin Rogan led to a double yellow card being issued. The Drumnaess back four of Gilchrist, Rogan, Ward and Murdock were doing enough to block Ardglass from scoring. 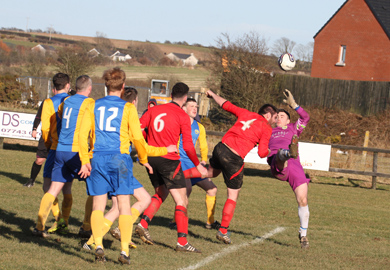 Ian Kearney scored a goal against Drumness to take the lead for Ardglass with five minutes to go.[/caption]

Stefan Mason too had a good game for Drumaness. He lashed a powerful volley at the Ardglass goal from the right but just went past the post.

Ardglass defender Neil Teggart took a bad fall in a tackle late in the first half and went off to hospital with a suspected shoulder injury.

Then as the half-time whistle approached and both teams were working hard for a goal, it was Ardglass forward Ricky Kerr who received a long ball through the middle and passed the back line to slot the ball into the net out of reach of keeper Steven Keenan.

Ardglass though took the pressure off the pedal and could have let Drumaness back into the lead again before half-time.

The second half started with a very useful volley from Gary Murdock who shaved the Ardglass top bar. And again as both teams toiled it was Mason who sent another shot on target  at the Ardglass goal only to see Armstrong stretching for it a making a crucial save. 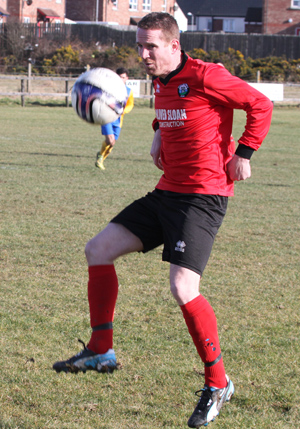 Chris Teggart was one of the Ardglass defenders who battled against a determined Drumaness MIlls side.[/caption]

As the half progressed, Drumaness showed signs of getting control and again Drumaness were unlucky hitting the side net with a shot from Johnny Ewan.

Ricky Kerr was having a good game and took on four defenders in the box but finally ran out of runway. On the Ardglass forward line Stevie Galbraith and Michael Magee were constantly working but perhaps it was the bumpy pitch which needed a good rolling but they just could not get a rub of the green.

Drumaness were quick on the break and another great volley by Gary Murdock from outside the Ardglass box almost paid dividends but was just wide.

But the Ardglass defence too was not giving anything away the Drumaness front line found it difficult to penetrate them. Manley appeared a constant threat to Ardglass and in one charge at the Ardglass goal he was well challenged by Brian Crangle.

Then a great play by Stevie Galbraith passing to Ian Kearney saw the ball bouncing off the keeper and another shot from Kerr but again keeper Keenan blocked that one too defying the Ardglass efforts.

Galbraith came more into the game towards the middle of the second half. Sub Ranan Crangle made a great run and pass to Ciaran Dorrian who was just off target. Ardglass won another corner and the pressure was now on Drumaness.

At 40 minutes Drumaness conceded a free kick on the right outside the box and Chris Teggart took it sending the ball to the head of Ian Kearney who rose over the defenders sending his powerful header into the net below the crossbar.

Two minutes later, Drumaness forward Adam Neale cancelled Ardglass’ lead as be managed to deflect the ball into the Ardglass net at a sharp angle.

Just one minute later the match was boiling and Ardglass forward Ricky Kerr made a solo run and fired the ball just an inch over the Drumaness bar. The match ended with another quick break from Drumaness as Mason crossed to Darren McConnell and the ball again was just over the bar.

This was a match that Ardglass should have won but Drumaness were more motivated it appears as they are trying desperately to stay clear of the relegation band at the bottom of the table.