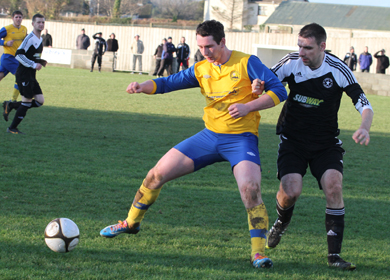 Drumaness Mills kept Crumlin Star at bay in a tense clash at Meadowvale.[/caption]

THIS was an important game for Drumaness Mills having clawed their way to the top of the Premier  table league leading by a point with a couple of games in hand, but Crumlin Star still have six games to play due to  various cup commitments so could still be contenders for the league.

It was the homeside Drumaness who took the game to Crumlin at Meadowvale with early pressure, and from an early stage the temperature of the game was ‘hot’ with one Crumlin player booked early for dissent.

After much action up and down the pitch, an excellent ball was fed through to Mills’ stiker Barry McIlmurray who cut through to the back of the box past the defenders and slammed the ball into the back of the Crumlin net for a 24th minute lead (and ultimately the winning goal.)

The Drumaness front line were well in attacking mode and there was excellent play between scorer McIlmurray and Nathan Jones. Jones at one stage got past the Crumlin defence but it was only the quick reflexes of Crumlin keeper Malachy Thompson that prevented the lead extending.

Drumaness assumed most of the possession with constant attacks on Crumlin on a pitch that had a very slippery surface and with the wind blowing hard.

On thirty five minutes, Mills half-back Gavin McEvoy  raised his game by making a number of penetrating runs and passes causing havoc for the Crumlin defence. He got possession near the goal and almost scored a soft goal but again Crumlin keeper Thompson thwarted the sublte effort. 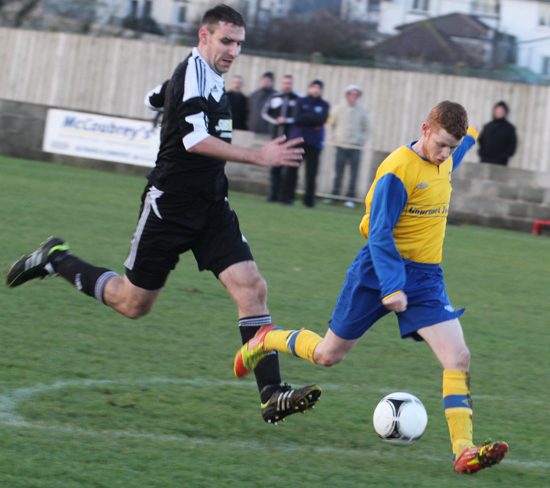 Drumaness Mills forward Barry McIlmurray scores the only goal of the match against Crumlin Star.[/caption]

Crumlin came back fighting in the second half with a sustained attack on the Mills goal and a header by Patrick O’Neil almost earned the equaliser as the ball just went over the top post in a good effort. The visitors were battling for an equaliser and at least a point, but gradually the Mills turned the screw and the pressure was back on Crumlin.

McEvoy passed a long ball to Jones who volleyed it just over the bar from te back of the box, and excellent spot perfect pass and attacking effort. McEvoy was teasing the Crumlin defenders on the left wing with constant attacks and they found him hard to handle. 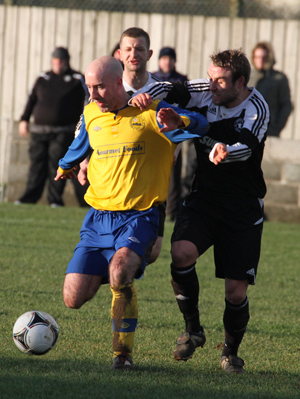 Drumaness Mills half back Gavin McEvoy played his part in the victory over Crumlin Star.[/caption]

But in occasional forays into the Mills half, Crumlin were still dangerous and on one attack it was a timely fingertip save from Drumaness keeper  Steven Keenan that kept the ball out of the net.

The game became quite tense at this stage and more physical and McEvoy’s attacks were definitely worrying the visitors. On one occasion he was felled by Drumlin right back Philip Savage and the free kick to Aaron McGrattan  fed through to McIlmurray again saw the ball just miss the Crumlin woodwork.

On the 73rd minute, McGrattan made a tremendous volley at the Crumlin goal but the ball was fingered over the bar by the goalkeeper. Drumness were making plenty of breaks through the Crumlin defence and the visitors were certainly under pressure from an increasingly confident Mills team.

But in the dying emners of the game, a row flared up behing the Crumlin goal when a Drumaness sub lifted a ball lying beside the net disturbing the Crumlin keeper who eyeballed the sub, and a serious row errupted involving managers, spectators and players was averted.

The game restarted and was hotly contested by both sides. The last serious move of  the match saw McGrattan make a clever low volley at the Crumlin goal in the 44th minute but it was a fraction wide. After a tense few minutes in extra time, Drumaness went back to the dressing room as victors in a key league clash.