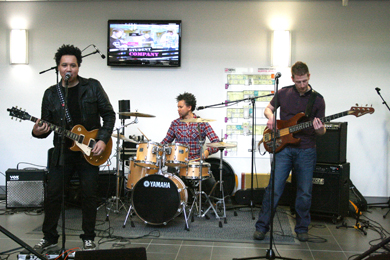 Relish in action at SERC in Downpatrick.[/caption] Local band Relish recently paid a visit to the South Eastern Regional College (SERC) Downpatrick campus. Also on stage were SERC music students and their tutor Bruce McClements, who gave a fabulous rendition of some well-loved carols. The entire event was run in conjunction with the Radio Station – Down Community Radio and was broadcast live on FM105. Relish are a Northern Irish rock band, composed of brothers Ken (vocals and guitar) and Carl (drums, keyboards and vocals) Papenfus, and Darren Campbell (bass and vocals). They have sold platinum albums, have won prestigious music awards, have written global hits, graced some of the world’s most famous stages and have fans stretching from Paul Weller to Brian May, to U2 and more. This gig was their first in Downpatrick for many years  and Campus Manager Paul Walsh was delighted to invite them to play at the college, especially since both Carl and Ken were students at the college  in the early 90’s, while Darren was an Art student at the Newcastle Campus around the same time.

SERC provides a range of full and part-time courses designed to give students’ the edge’. To find out how SERC can help you ‘get the edge’ call 0845 600 7555, visit www.serc.ac.uk or find us on Facebook, search: South Eastern Regional College. ]]>