<![CDATA[THE first race meeting at Downpatrick race course got off to a flying start with six races to entertain the punters. It was special day too as the recently refurbished bar and restaurant area and other amenities were launched at at ceremony before the racing began. And there was a few special moments of entertainment with well-known racing character, Monaghan trainer Oliver Brady, a favourite with local race-goers. [caption id="attachment_36988" align="alignleft" width="400"]<a href="http://www.downnews.co.uk/wp-content/uploads/2013/03/downpatrick-racing_21.jpg"> 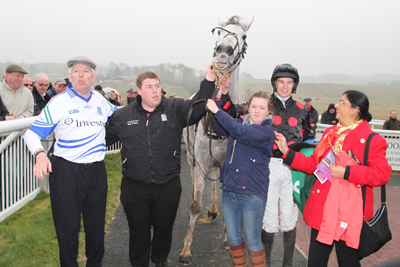 Khan Tengri wins at Downpatrick races.[/caption] The major facelift has covered a number of key areas to improve comforts and convenience for the punters. The Raceday Office is now located at the front entrance and you can pick up your Official Race Card from here just as you arrive. The Grandstand Bar is well refurbished with improved toilets under the Grandstand and in the Hospitality Suites. There is also a new machinery shed for course equipment which is still under construction and a Winning Connections Box is located next to the ring. A big screen was also in operation located next to the Grandstand to allow punters there to view the action as the horses gallop round the course. The plan is to install a larger screen on the wall beside the bookmakers. As the crowd arrived at the race course, the food bar area below the stand proved to be a big hit with the visitors, Speaking at the opening event, Peter Stewart, Downpatrick Raceclub Chairman welcomed the Club Patron Mrs William Brownlow and guests, and said: “I wish you all a happy season. I hope the weather is kind to us and that the horses and their jockeys all return safe from their races. “I’d like to thank Club Director Brian Nicholl for his excellent support through the project and a special thank you to Richard Lytlle, Course Manager, for his dedication and professionalism over the recent months of work.” [caption id="attachment_36989" align="alignright" width="400"] 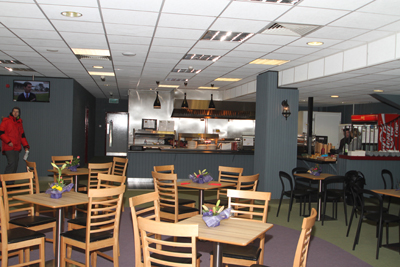 A view of the refurbished food bar below the Grandstand at Downpatrick Race Course.[/caption] As guests assembled in the refurbished foodbar area adjacent to Toals Bookmakers stand and the new public bar area, Richard Lytlle added: “We put in our shopping list for funding to the Horse Racing Trust and were successful. Now we have an upgraded stewards’ room, and improved food bar area and public bar below the stand; made improvements to the toilets in many places through the main stand area with more to come for the toilets around the grounds; and we have upgraded the grandstand. “I am very grateful for the help from the HRI Racecourse Grant  in all of this and particularly from designer Michael McKervey from Fresh Interiors who has you will all agree made a huge difference in uplifting the facilities. “We are delighted with the montage of old racing photos and newspaper clipping that are on panels around the walls and we would certainly welcome more old photos to continue this theme through the whole of the race course buildings.

“We also have a new brochure launched and a new website. And we are delighted to say that we are the only race course in Ireland that offers lunch to the horse owners running with us.” [caption id="attachment_36990" align="alignleft" width="400"] 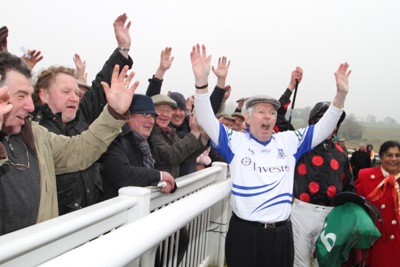 Oliver Brady, Monaghan trainer, gets the crowd going at Downpatrick Races.[/caption] Also speaking at the launch, the ever popular Oliver Brady, sporting a Monaghan football shirt, spoke of his friendship with many people in the North, adding he was delighted to be at the first race meeting of the year in Downpatrick.  He recited a poem for the occasion which earned a deserved applause. He presented a bouquet of flowers to the Club Patron Mrs Brownlow. Speaking to Down News, talented interior designer Michael McKervey from Darragh Cross, who runs Fresh Interiors (www.freshinteriorsni.co.uk) said: “This was a very exciting project to work on. It was interesting to collect old racing photographs and press cuttings and have them mounted on the walls as collages so that wherever you are standing in the Grandstand bar area you can see them. “I am really delighted with the finished job here at Downpatrick Race Course. Recently I designed the interior for the popular Dark Horse in Belfast and the Potted Hen, the most talked about restaurant in the city, and will also be working on an extension to it later this year.” Brady had tipped the horse Khan Tengri owned by Ms Rita Shah that he had trained to win in the third race. Working together fundraising for the Shabrah Charity Foundation set up three years ago, Ms Shah with Oliver Brady’s help  have raised funds to purchase equipment for heart, cancer and eye care treatment and building an orphanage in Kenya and a Secondary level girls school in Nigeria. [caption id="attachment_36991" align="alignright" width="400"] 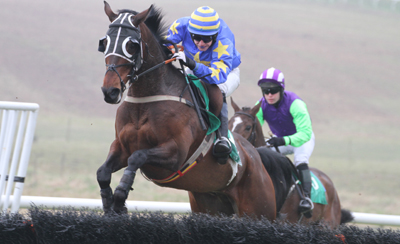 Drumgooland jumps the last in the Marinstown Opportunity Maiden Hurdle.[/caption] In the third race, Khan Tengri trailed mostly in third spot in the 2 mile 2 furlong novice handicap behind leader Shattered Dream and Goodtime Boy in second place, but in the last half mile, jockey AP Heskin unleashed his horse romping home safely. Ms Shah won the €10,000 purse and said after the presentation that she was delighted with the way her horse has shown itself on the day. Speaking after the race, Oliver Brady said with his inimitable wit that himself and Khan Tengri were a great team, as the horse had recently had three major operations, and that he too had had five operations in his fight against cancer. A man of irrepressible humour!    ]]>