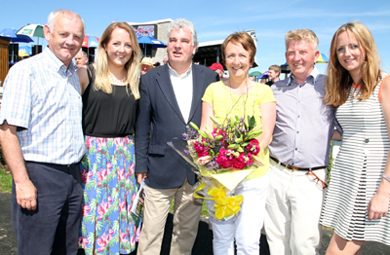 Smiler  showed his liking for the venue in the opener with a repeat success having won a bumper at the course last year. The winner owned, trained and ridden by top amateur Mickey O’Connor was always at the head of affairs but Oscar Vespasian made steady progress to go fifth on the downhill run and challenged at the final flight and as the pair climbed the hill Smiler just held on to score by a neck writes Joe Kavanagh.

O’Connor said: ” It’s a pity the track is so far away as he loves it here.  He very honest and hard on himself. The management have done a great job watering – I would call the going good rather than good/firm  He’s a summer horse and I might aim at a winner of one at the Galway Festival.  He’ll run over the winter months on the all-weather at Dundalk.”

Sligo based handler Mark McNiff who has an excellent record of success at the course sent out Penny’s Tune to land the mares handicap hurdle.  Kathys Girl attempted to make all but the winner eased into the lead three from home and was always in command thereafter with just the final two flights to negotiate with claiming rider, Derek Fox aboard.

CHECK OUT 33 PHOTOS FROM THE RACES 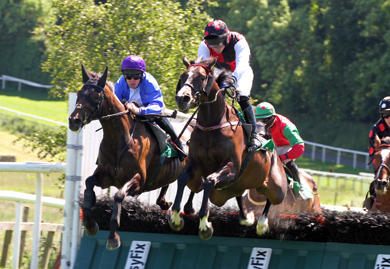 The Sligo trainer said: “On her first run for me she ran well in a race here last time won by a horse that was better than the type of race. You’ve to talk nice to her! I thought if she repeated that run she would have a chance.  She’ll maybe get to Tramore as she doesn’t like the stalls or there’s a Sligo mares winners race or another race back here next time.”

The temperature increased during the afternoon and the handicap hurdle marking the departure of course administrator Catherine Kelly added to racing pulses as the Oliver Brady trained Shabra’s Berolini and House Limit could not be separated by the judge and a dead heat resulted.

Shabra’s Berolini with Brian Hayes aboard lead as the front running, Cerca Trova faded but approaching the penultimate flight Conor Maxwell on House Limit challenged and got to the front in the uphill finish, but the Oliver Brady runner rallied to such affect – the pair shared the spoils.

Trainer John Larkin [ House Limit] said: ” It’s a pleasure to dead heat with Oliver while Anthony McCann representing the County Cavan trainer said: “At last he’s done it with the  first win from 21 starts. I would have settled for a dead heat passing the post.”

Enjoying the sunshine at the County Down course was Patron of Downpatrick, Mrs Eveleigh Brownlow, who was the recipient of an MBE in the honours list last week for her voluntary services to the community in Portaferry. 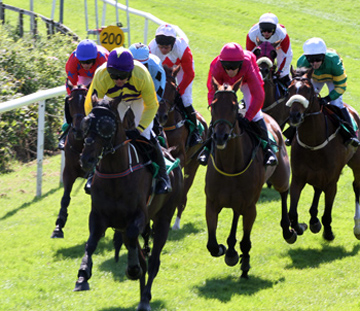 Mighty Whitey supplied a local success landing the Beginners Chase for Draperstown handler, Noel Kelly by half a length from Darwins Theory in a hard fought tussle to the line.  The winner made all the running but was joined by the runner up at the final fence but jockey, Mick Darcy had enough in reserved to hold the belated challenge.

The County Derry trainer who has been enjoying considerable cross channel success with the winner and Back To Bracka in recent weeks said:  ” For his first time over fences he ran very well. You wouldn’t put him over the bigger fences – he’ll run at the smaller tracks.  He loves that ground. This track suits him. He could go back to Sligo, he’s entered this week but it’s unlikely he will go there this week. He’s very game. Mick [Darcy] said he wanted to go long at everything –  I wasn’t sure he would get the trip.”

Coldstonesober trained by Jimmy Finn in County Tipperary was another narrow winner beating King High a length in the other handicap chase while The Baler supplied another winner for Johnny Burke – recently turned professional and the winner trainer by Philip Dempsey in County Kildare and again only a length separating the first two home.

The concluding bumper followed the pattern of the day with a three-way photo and the Gordon Elliott newcomer, Itchyoumessratch with Nina Carberry in the saddle prevailing over favoutite Tempest Missile and again a length covering the first three home and the remainder a distance behind.  The winning trainer said: “Nina said nothing worked out for him in the race so getting the win was great. He might get a break and go hurdling.”