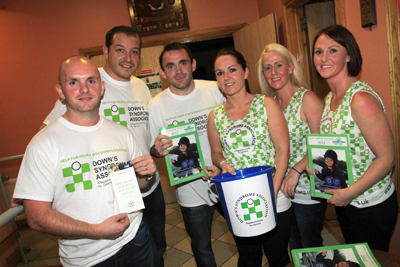 Robert and Barry Loudon, Damien Curran, Judith Loudon, Joan Gracey and Karen Curran who organised the fundraiser for the Downs Syndrome Society at the RGU for their joint marathon run in Dublin later in October.[/caption]

A group of six runners from Downpatrick are running in the Dublin marathon in support of the Downs Syndrome Society.

On Saturday evening  (5 October), JR Loudon and his team organised a fundraising dance at the RGU clubrooms and raised a fantastic £1300 for the charity.

They were collecting for young Hollie English from Downpatrick, who has Downs Syndrome.

JR Loudon said: “We are all delighted at the turnout this evening and we’d like to thank everyone for their generosity. It will certainly give us a great boost as we make the final preparation in our training for the marathon which we all intend to finish. We have been training since April and are looking forward to the 25.2 mile challenge. It won’t be easy but we’ll do it!”

Hollie’s parents Martin and Sharon English too were delighted at the support and turnout on the night and thanked all who turned up, and wished the runners well in their run in the marathon.

Check out the images on the night at: